The big question on every executive’s mind is: Where to find future growth? Whether the question is an urgent one or driven by a regular strategic planning cycle, without future growth a business can not sustain for long. In this post we’ll look at growth horizons and venture design while introducing the Ark of Commerce™ and providing context to the ROUNDMAP™ framework.

You may remember the image (below) when we discussed Growth Activation™ ─ to illustrate how multiple horizons of growth will help plan for sustained growth. To warrant short-term growth (horizon 1), we’ll need to defend and extend our streams of revenue while managing the core operation.

Before these revenue streams become restrained, we’ll need to make sure new lines of business can emerge (horizon 2), often relying on the existing core. Additionally, we’ll need to explore viable business options ─ even if these require an entirely new core (horizon 3). 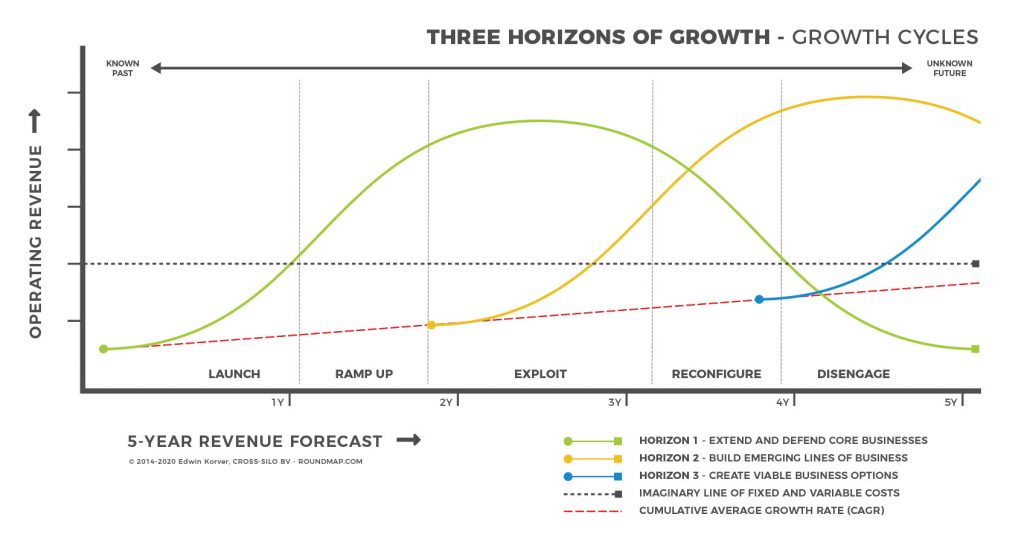 However, some companies have responded to these turbulent times by introducing a transient growth strategy: they’ve developed the capacity to launch a new line of business every 1 to 1.5 years and work relentlessly to mature these into viable ventures, causing growth cycles to overlap. This approach is known to as venture design, based on transient advantage.

This is how growth cycles of a venture-design business looks like:

Regardless if our lines of business depend on fleeting competitive advantages derived from a single core (first graph) or from transient advantage derived from multiple cores (second graph), we’ll have to take into account the causalities and interdependencies that exist within each core.

WHAT's AT THE CORE?

Following the creation of the ROUNDMAP™, we wanted to describe how the body of knowledge relates to the business operation at large and to show that ROUNDMAP isn’t just an instrument to improve customer performance, rather an essential part of an integrative framework: from mission to strategy, to planning, to product design, to realization, and ultimately to sustaining growth.

If you look at the ROUNDMAP™ logo, you may have noticed a compass needle. This needle represents the purpose of the mission, i.e. the group of customers for which the business intends to create value. However, to reach this target audience, and to be able to respond effectively to changes in demand or adversarial forces, the business operation has to be able to ‘maneuver’.

This led to the idea to describe a business as a vessel, sent out on a mission to fulfill its purpose.

We are revising the section below. For one, we’re created the Busines Roadmap to facilitate venture design. The Ark of Commerce is ,therefore, likely to be replaced following new insights.

The Ark of Commerce™

So, we perceive the entire business operation as a boat sent out on a mission with the bow pointed towards the target customer. We named it the Ark of Commerce™:

WHAT DRIVES THE ARK

To explain what drives the ark forward and allows it to maneuver, we consider three frameworks:

Ok, now let’s look in more detail to how we’ve arranged the components of the Ark of Commerce:

Firstly, we distinguish between four stages of growth (click on the image above; from left to right):

Growth Planning and Growth Activation are separated by the Functions that need to perform the jobs ─ the primary and secondary activities, arranged in units (groups, departments, or divisions), also referred to as the value chain.

A special word of thanks to Mihai Ionescu for his valuable feedback.

A regular operation may consist of one Ark of Commerce, however, a typical venture-design business may have several smaller arks ‘in the water’, side-by-side, each one competing for profit and growth.

Experts noticed that when markets become more volatile and therefore unpredictable ─ due to fast emerging innovations ─ competitive advantages tend to flee faster. However, most incumbents tend to believe that any early-stage technology, process, or product won’t be as effective as something that’s been honed and polished for years. This proved to be a misconception ─ a superiority trap. If the upstart innovation matures, and in many cases it will, the incumbents are often too late to respond.

Instead of betting against the notion that sustainable competitive advantage is now the exception, not the rule, firms do wise to mitigate the risk of becoming disrupted by launching multiple ventures with speed and frugality. Until the new winners have emerged from the dust and the race for the best quality, with the best service, at the lowest price resumes.

This is how we would like to represent the two strategic advantage playbooks: 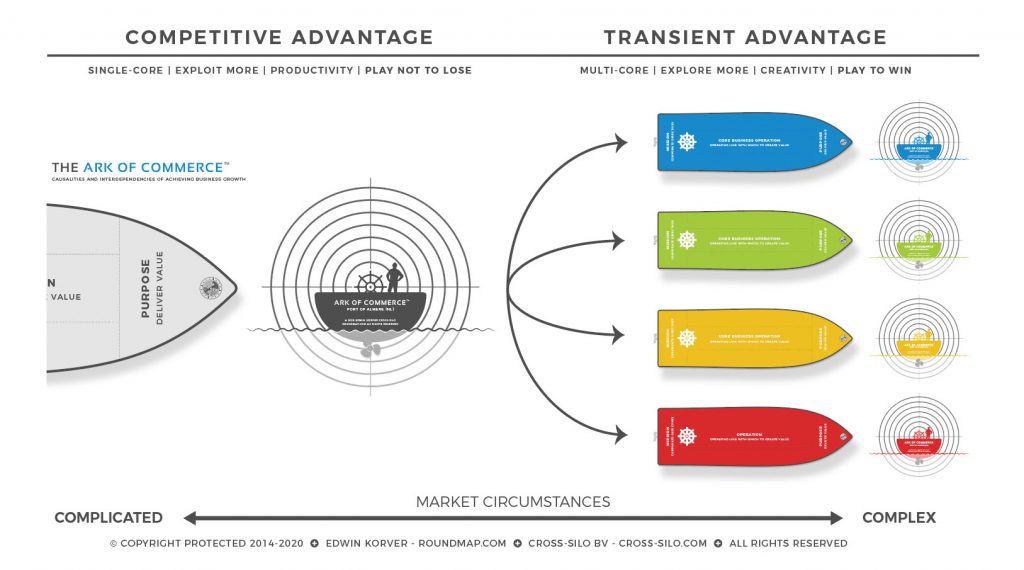 To the left is a single-core business operation, battling to defend its market position against new markets entrants, changing regulations, global competition, and technological disruption. To the right might be the best answer: starting a series of new ventures, each based on a vision of the future.

Is this response to market turmoil unique in history? Ofcourse not. According to the authors of the bestseller “In Search of Excellence” (1983), companies like Hewlett-Packard and Texas Instruments in the 80’s also formed small separate teams with a high level of autonomy, to launch new products with ‘speed and frugality’ ─ similar to venture design today.

How to use the ARK OF COMMERCE?

We believe the Ark of Commerce can be used as a playbook:

The best way to perform this exercise is by using a spreadsheet. Please contact your ROUNDMAP™ Certified Professional for further details.

Ark of Commerce VERSUS ROUNDMAP

Let’s see if we can bring the two, ROUNDMAP and the Ark, together.

Secondly, we’ve described on many occasions that the ROUNDMAP represents the frontline operation, which is the part of the operation that actually targets the customer.

As such, the Ark of Commerce™ is perpendicular to the ROUNDMAP™ (you may have noticed the blue and red line at the bow of the Ark) and therefore the two can be represented like this: 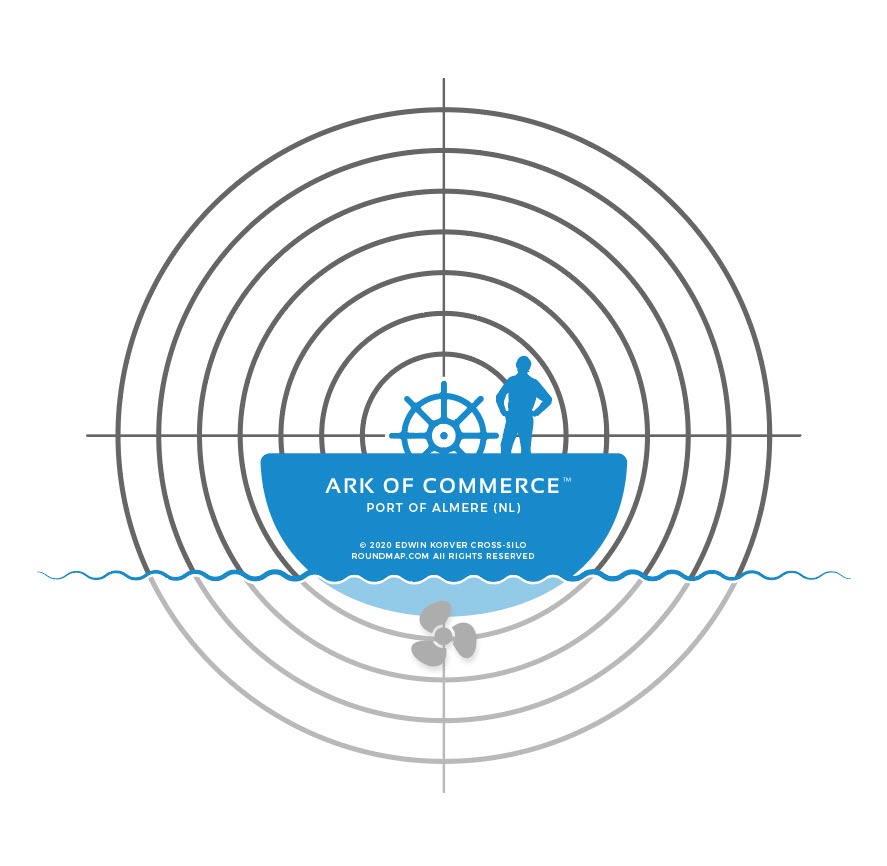 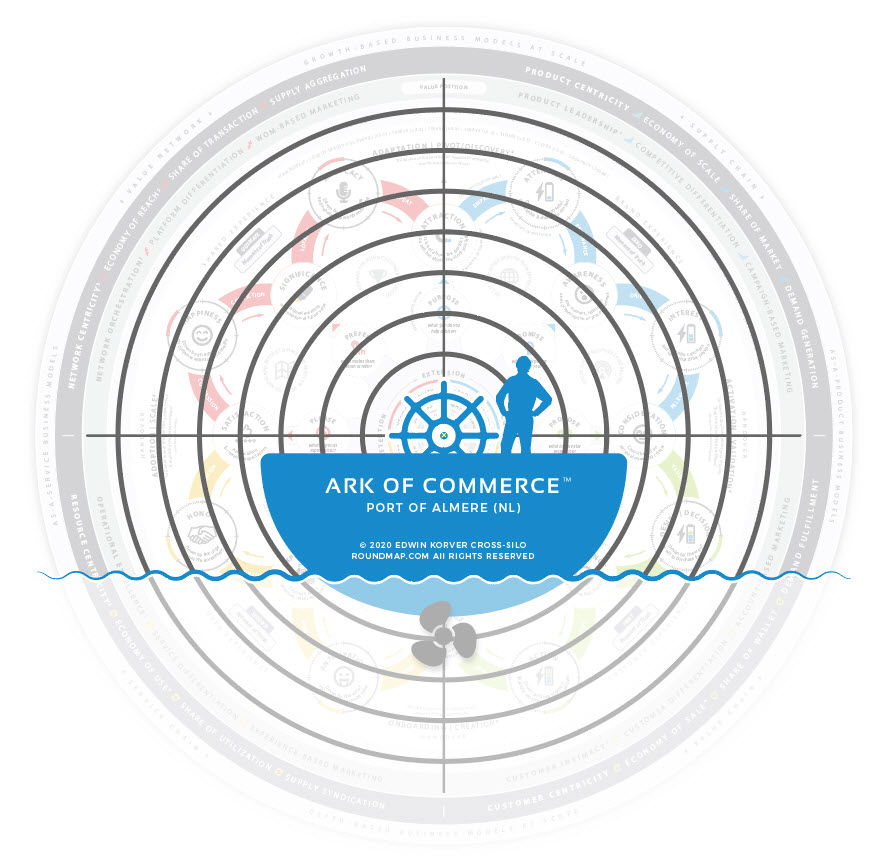 "Well over half of executives from across all industries say that their main competitor in five years will be a different company than it is today."

Tesla’s mission is to accelerate the advent of sustainable transport by bringing compelling mass market electric cars to market as soon as possible. In 2013 Tesla stocks were believed to be overrated, implying Tesla would have to reach ‘321,000 vehicle sales a year by 2020, a 48% CAGR’ (growth rate). By introducing the Model 3, Musk was able to get the production numbers past the 321.000 vehicles mark, one year prior to what was perceived to be impossible in 2013. Allocating the required resources and acquiring the capabilties needed for large scale car production did prove to be a challenge while most of the processes and services today are still way below-market standards. 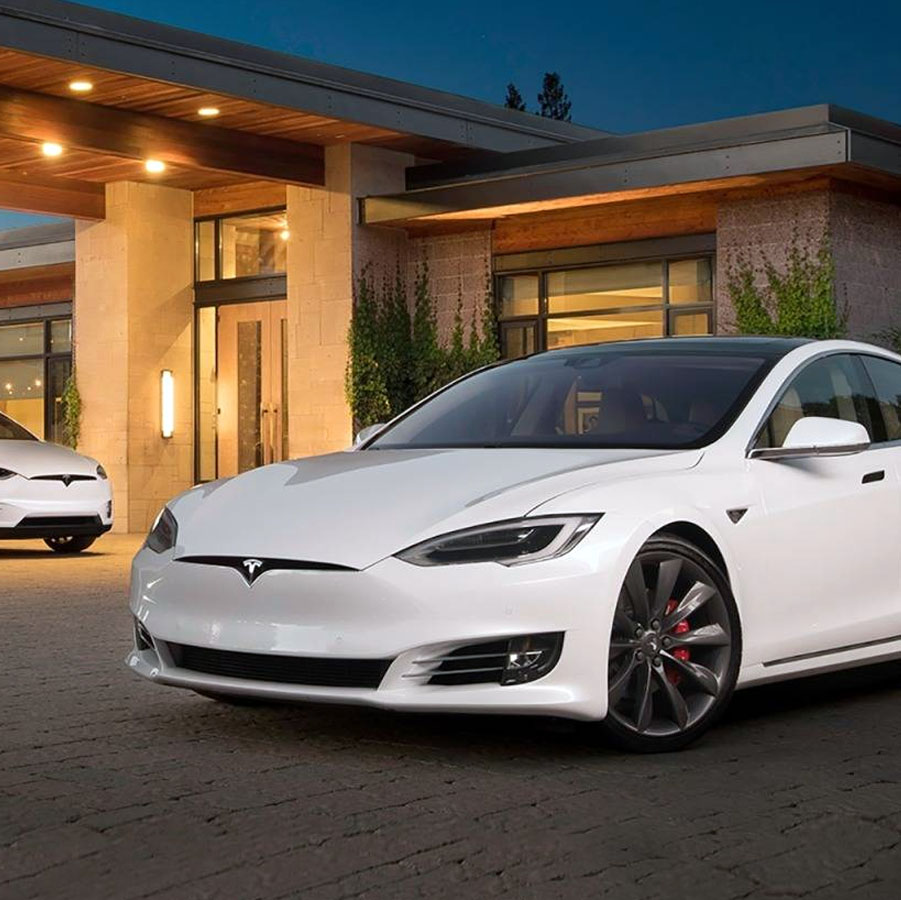 Growth can be achieved in many ways, often combining several methods. In the example of Tesla, growth was achieved through segmentation: by developing a more expensive car for more-exclusive customers (at scope) and a cheaper model for customers in a lower price range (at scale).

These are 10 ways to achieve growth (there are more):

Always be aware of the interrelationships between resources, capabilities, functions, processes, and services, especially if you plan to share elements between multiple units or divisions. These interrelationships may provide economic benefits, however, they could also lead to higher cost of coordination, compromise, or inflexibility (Porter).

There are many causes for not achieving the aspired growth, some of which we’ve addressed here ─ research demonstrates that a mere 20% of firms succeed in achieving their growth projections.

"Growth created complexity and yet complexity is the number one killer of profitable growth."

Kodak was the first to explore the opportunities of digital photography. Millions of dollars were invested in developing the first digital camera while Ofoto was the first website that allowed customers to store and share their digital photos. Due to the enormous pricetag attached to a digital camera, Kodak did not expect digital photography to take off anytime soon and therefore kept its focus on celluloid films. A huge error of judgement. Merely 4 years after the introduction of the iPhone, the company had to file for bankrupcy. Kodak had not only failed to understand that the opportunities provided by digital, to share photos amongst peers on the fly, would displace traditional photo printing, but was also wrong to assume that their competitive advantages with regards to celluloid film would prevent them from being disrupted. 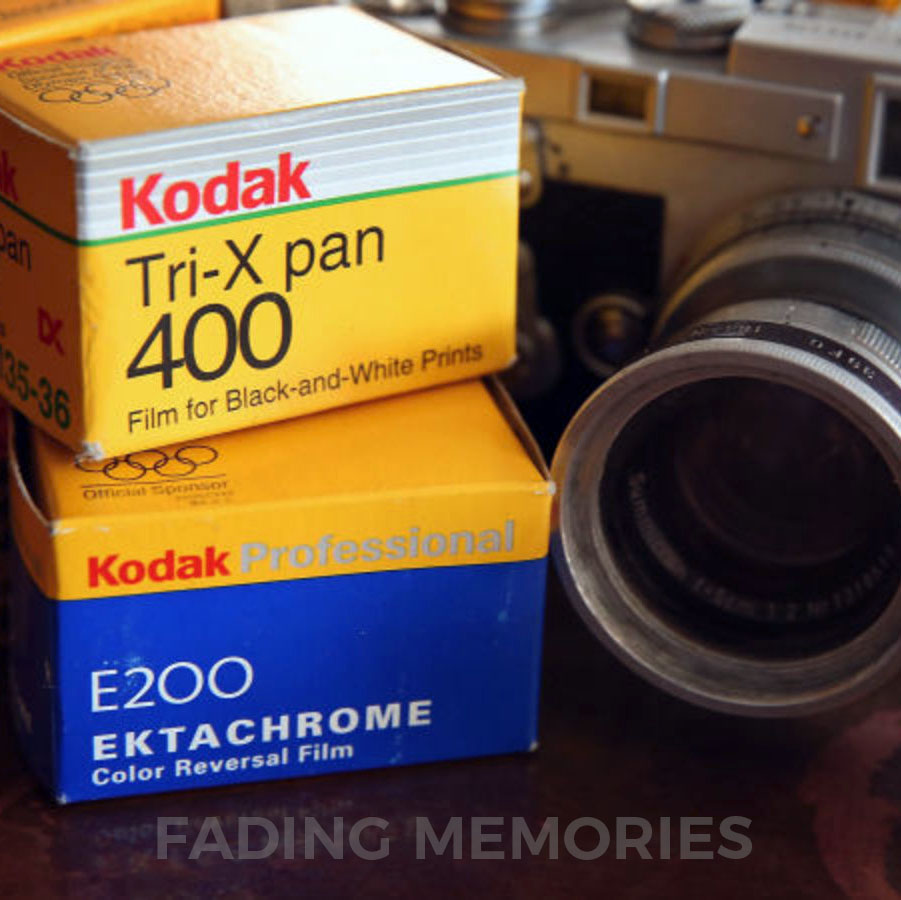 PrevPrevious ItemRight on the Money
Next ItemRide the Waves of ChangeNext 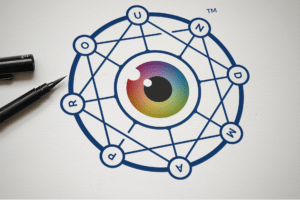 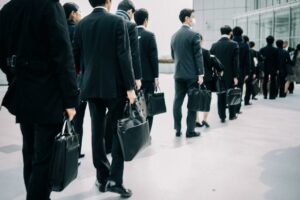 When Business Culture Became a Cult 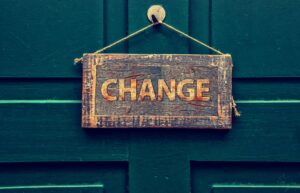 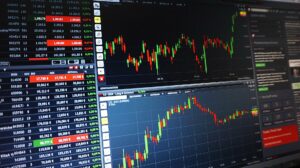 ROUNDMAP™ – How We’ve Closed The Loop 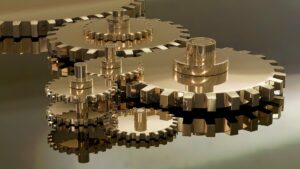 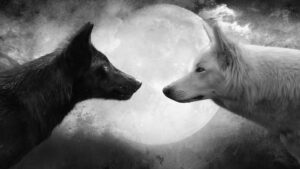 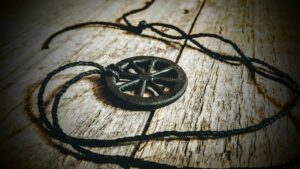 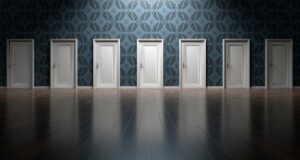