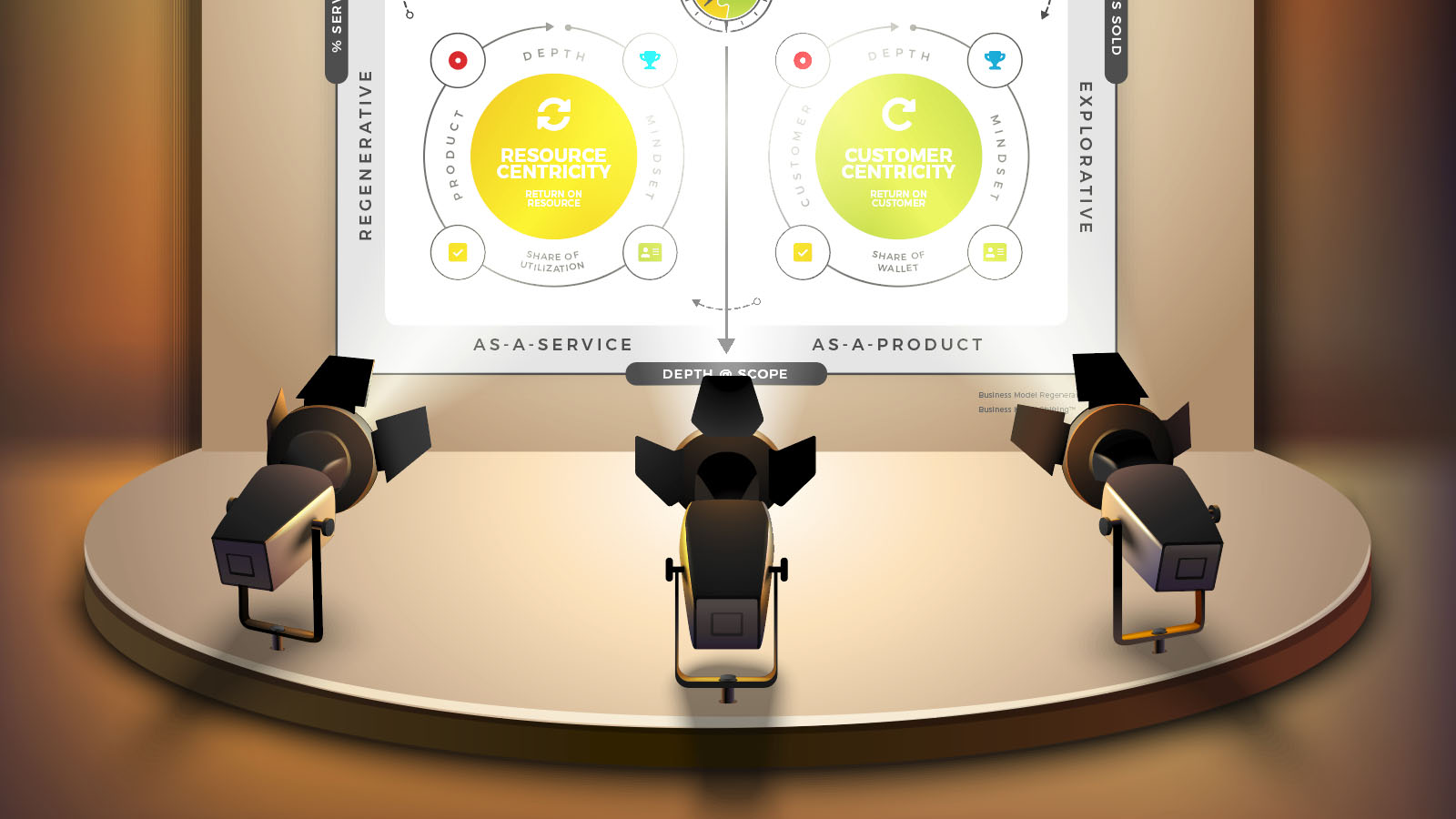 While creating the Integrated Customer Lifecycle™, interconnecting all front-line departments, we found remarkable similarities between a focus on sales and the traits of Customer Centricity. Similarly, a focus on marketing pointed to Product Centricity. We started to wonder: Could we match other business models to the two remaining functional sections of the Integrated Customer Lifecycle™, and if so, what does it mean?

Now let’s have a look at the Business Model Matrix™: 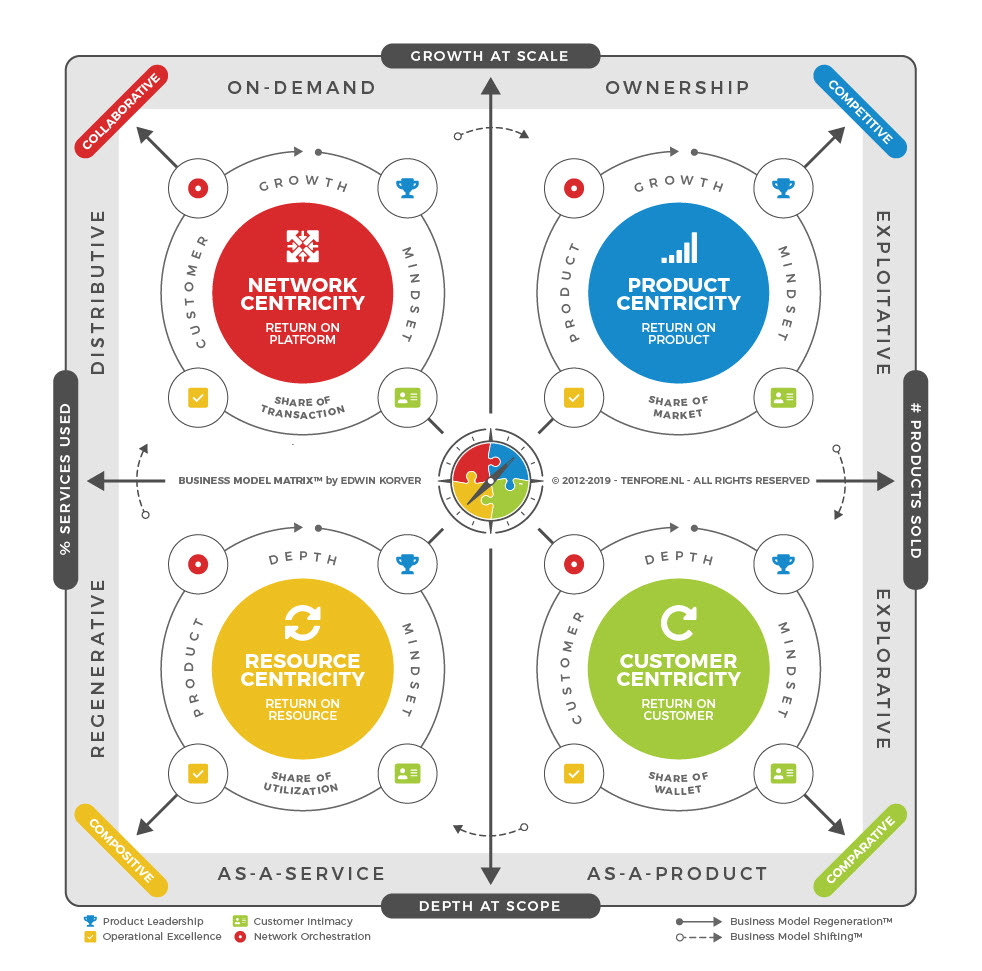 Don Peppers, author and co-founder of Peppers & Rogers Group, created a simple graph to explain the differences, inspiring us to create the following image: 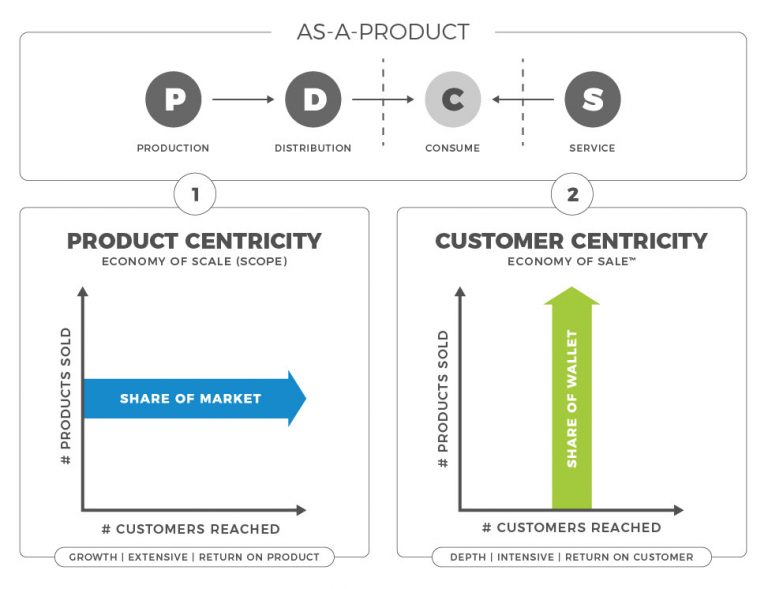 “Product-centric competition is based on having a product that meets a certain customer need, and then trying to find as many customers as possible who want to have that need met. Success is measured by the number of customers reached. In competitive terms, this would represent a share of market.”

“Customer-centric competition starts with an individual customer and tries to meet as many of that customer’s needs as possible – across all the company’s divisions and business units, and through time. In competitive terms, this would represent a share of customer.“

In the Business Model Matrix™ we used the term ‘Exploitative’ to capture the traits of Product Centricity, which is ─ as suggested by the vertical axis ─ a growth-driven business model used to exploit the full market potential (addressable market). This objective can (only) be achieved at scale through extensive marketing campaigns.

Examples: the majority of businesses operate in a product-centric mode.

Customer Centricity on the other hand is ‘Explorative’ by nature: it is an in-depth business model, exploring the scope of individual customer needs. It is NOT about pleasing your customers. Contrary to the marketing process, which addresses problems experienced by suspected customers in the market at large, the sales process is about offering a solution, building individual relationships, and helping lead customers to make informed decisions. Account-based marketing, or account management as we used to call it, is the best way to explore customer needs. In competitive terms, this model represents a share of wallet.

Both these business models are AS-A-PRODUCT models, meaning, it is about getting a customer to buy a product or service by which they obtain some form of ownership or possession over it.

As you can see, both of these two business models match the right-hand side of the Business Model Matrix™ and, therefore, match the acquisition-side of the ROUNDMAP™.

However, as it becomes harder and more expensive to acquire new customers, leadership is shifting attention to customer retention. At the same time, digitalization is pushing competition from AS-A-PRODUCT to AS-A-SERVICE business models.

As it turned out, there was no framework ─ to my knowledge ─ to describe both these known and new business models. So I decided to study each of them, especially the ones that are often referred to by popular terms such as Sharing Economy, Resource Economy, Servitization, Uberization, and Network Economy.

This then got me thinking: Could I match these ‘new’ business models to the left-hand side, the retention-side of the ROUNDMAP. As it turned out, I could.

I found two destinct AS-A-SERVICE models: a growth-driven one, which I named Network Centricity, and an in-depth one, which I named Resource Cntricity. This allowed me to map these two new models along the same vertical axis as the known business models.

However, I needed to make another distinction ─ on the horizontal axis ─ to turn it into a favorable two-by-two matrix. By adding ‘Percentage of Services Used’ (l) versus ‘Number of Products Sold’ (r) the Business Model Matrix™ came to be.

Resource Centricity is ‘Regenerative’ ─ it is about syndicating supply into a resource-based service-offering. An example of Resource Centricity is an airliner. The objective is to utilize each plane to its maximum capacity; it makes no sense to sell twice as much airflight tickets as there are seats available. Another example is a ride-sharing concept, like Greenwheels. Again, the objective is to maximize the use of each resource.

While car-sharing might appear ‘new’, it is not: we’ve shared resources (trains, airplanes, buildings, theatres, etc.) since the age of civilization, however, the internet and mobile technology in particular took away much of the physical restrictions.

Resource-centric competition is based on a service-driven resource that meets a certain customer’s need, and then trying to get as much of that resource utilized. Success is measured by the average percentage of the maximum capacity used over a period of time. In competitive terms this would represent a share of utilization.

Network Centricity, on the other hand, is about aggregating supply and demand in a marketplace, or ‘marketspace’ as it happens to be called in the digital world.

Modern examples of Network Centricity are Amazon’s Marketplace, eBay, and Facebook. It is where participants meet, often facilitated by a digital platform, to exchange value. However, we’ve seen these marketplaces appear throughout the ages, even along the ancient Silk Road. Again, digital took away many of the physical boundaries. 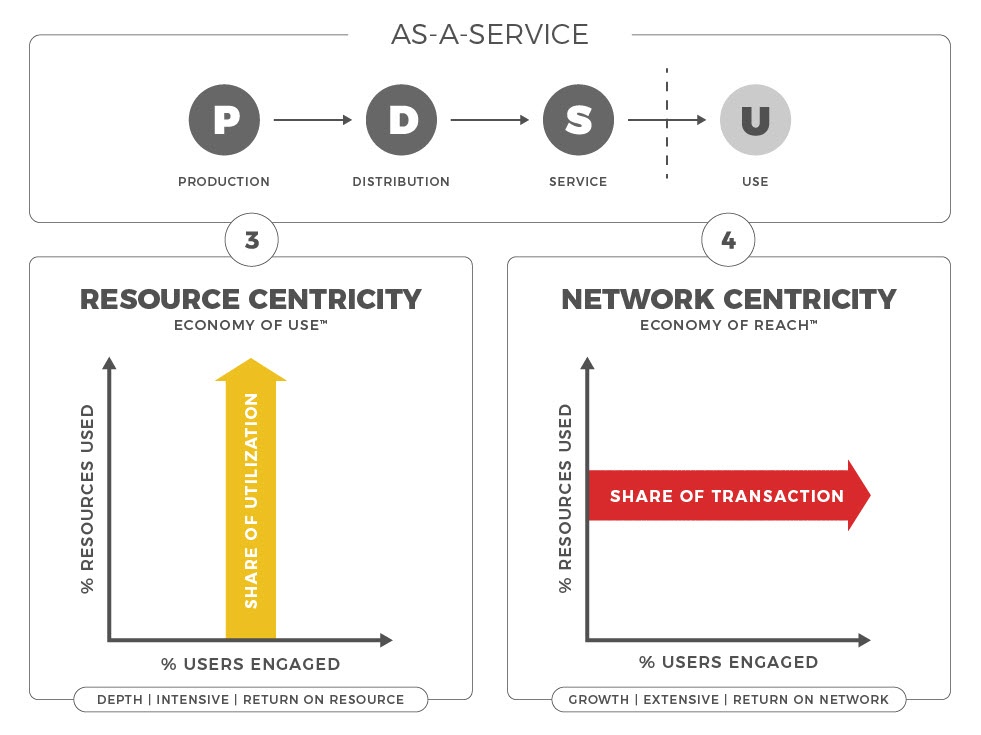 I guess you by now understand why we mapped these AS-A-SERVICE models as we did. Indeed, a resource-centric business model is a monitization of a service-offering, i.e., a focus on the delivery processes, while a network-centric business model exploits a company’s ability to pro-actively build lasting relationships, i.e., pointing to success.

We found that it is now possible to describe any business model through the lens of the Business Model Matrix™. That’s why we refer to these four business models as the Elemental Business Models™. The figure below gives you a clockwise overview of the four models, their leverage and some of their traits.

We also created an insightful overview of how these business models regenerate(d) over time and a Strategic Playbook.

You may be familiar with the three types of value position by Treacy & Wiersema. As it turned out, similar to the business models, I was able to map these value disciplines into the same 2×2 of the Business Model Matrix, but only after I added a fourth.

These value disciplines, as assumed by Treacy & Wiersema, are determine by the opinion of external parties of what the company is good at. To determine its value position, four rules have to be considered:

The three value disciplines are:

If you perceive these three value disciplines in sequence, you’ll begin to see that they follow the same pattern as the four Elemental Business Models. Remarkable, isn’t it.

But there is one missing. Treacy & Wiersema introduced their assumptions in 1993, before the Dotcom boom. One of the innovations that lead to the rise of e-commerce was the ability to show how much items were in stock. Prior to this, it was impossible to combine online catalogs with the actual status of an offline inventory. This led, combined with online payment processing, to large trading platforms like Amazon’s Marketplace and eBay.

When we needed to come up with a fourth value discipline, we therefore choose: Network Orchestration. We borrowed the idea from an article on Harvard Business Review, in which research, examining 40 years of financial data, showed that “Network Orchestrators outperform companies with other business models on several key dimensions.”

Although the authors suggested ‘Network Orchestrators’ to be a business model, we believe it is a value position, which can be applied by all four business models.

So, there you have it. Four Elemental Business Models™ and four value disciplines mapped in one matrix, the Business Model Matrix™, with which we believe you can plan and execute any business strategy. There is so much more to tell, so keep an eye on our newsitems to come, or assign to our newsletter so we can keep you posted.

The Business Model Matrix™ is part of the ROUNDMAP™ Full Stack: 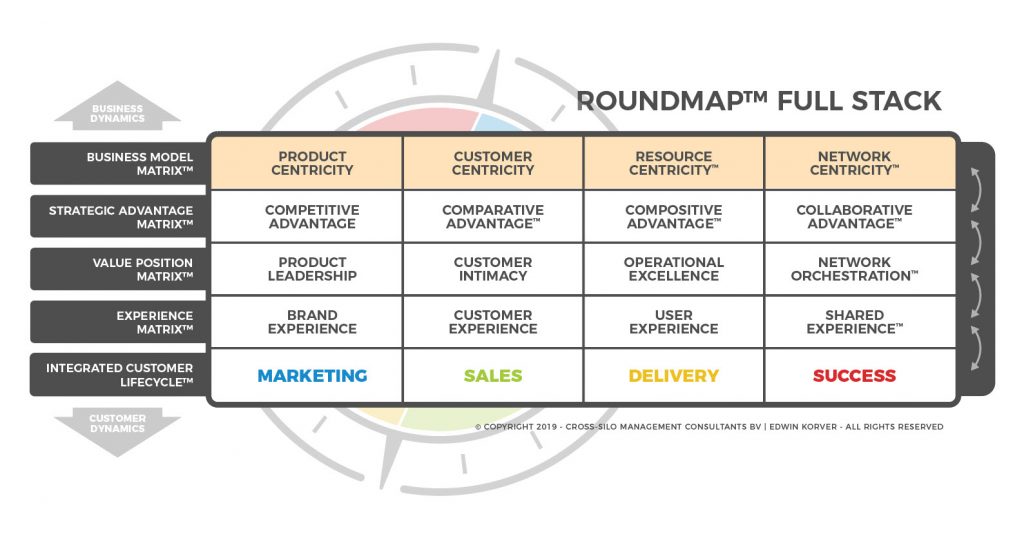 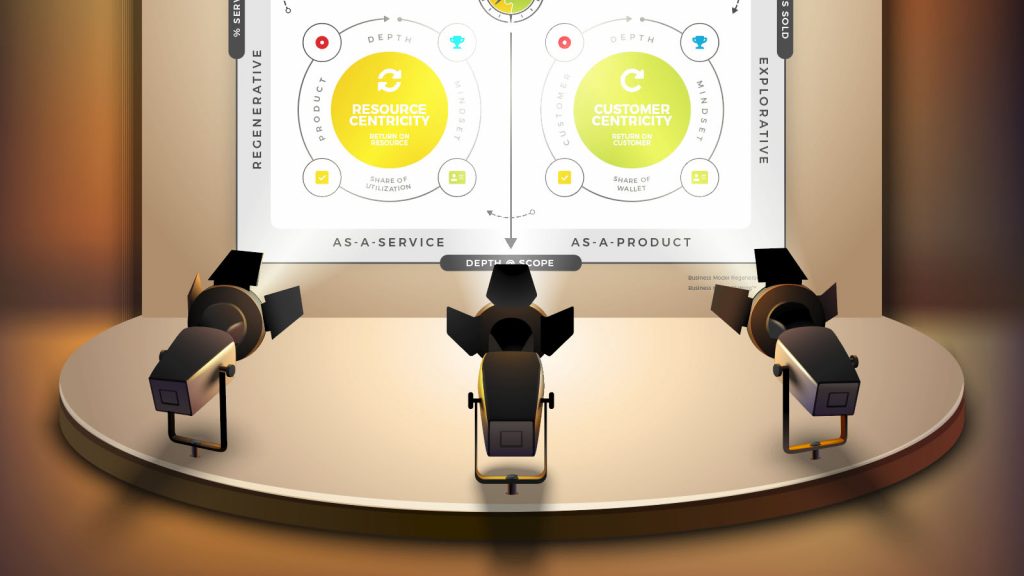