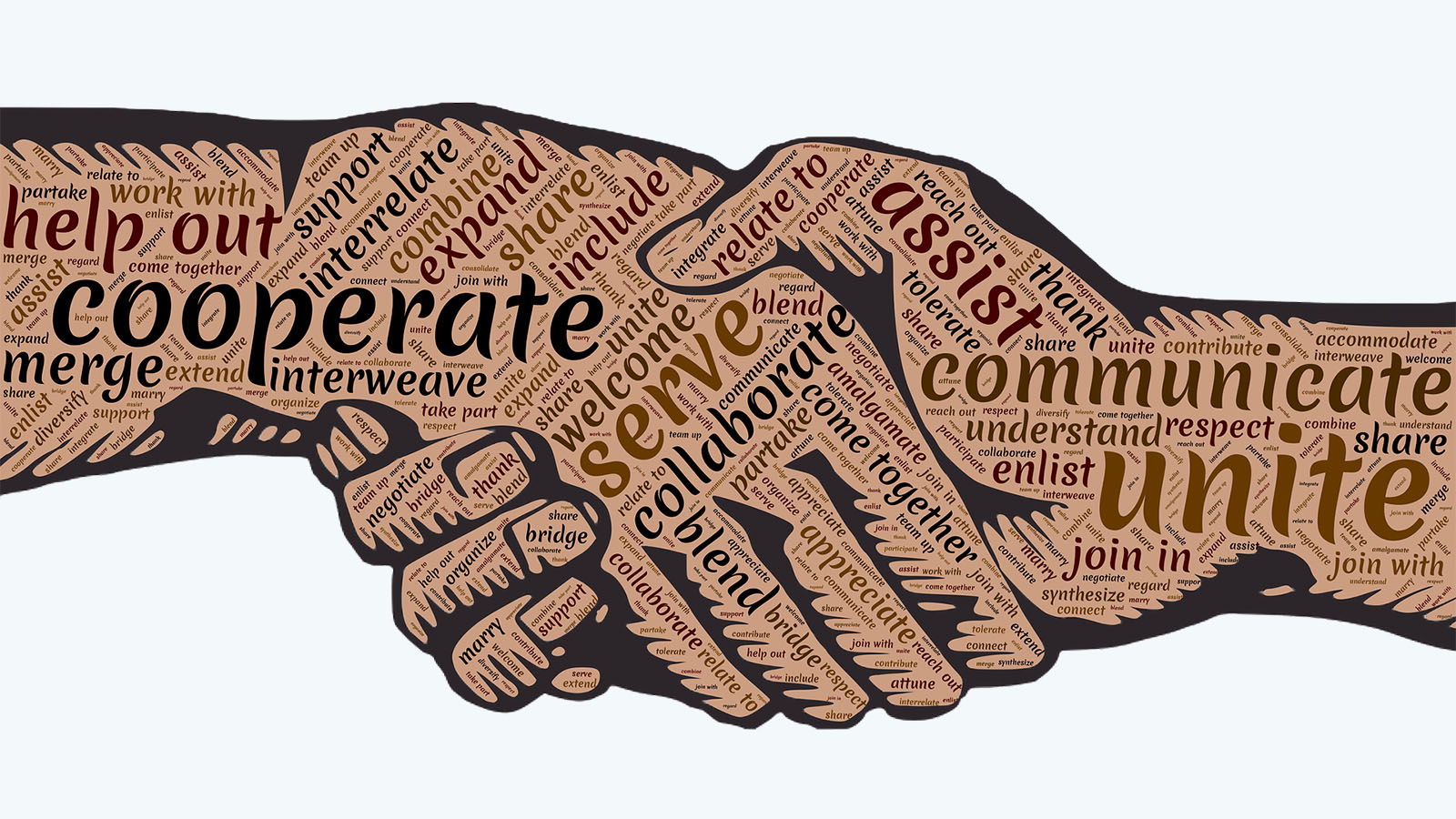 We’re all too familiar with the typical bureaucracy consisting of a hierarchy of authority, while employees are grouped by the functions they perform for the organization. This command-and-control structure allows the operation to be directed and managed with ‘military precision’ towards ‘predictable outcomes’. However, this structure is also known for its functional and mental silos, creating roadblocks, discouraging participation, agility and creativity. The question is: How can we cope with today’s disruptive circumstances without the need to overhaul the entire structure? 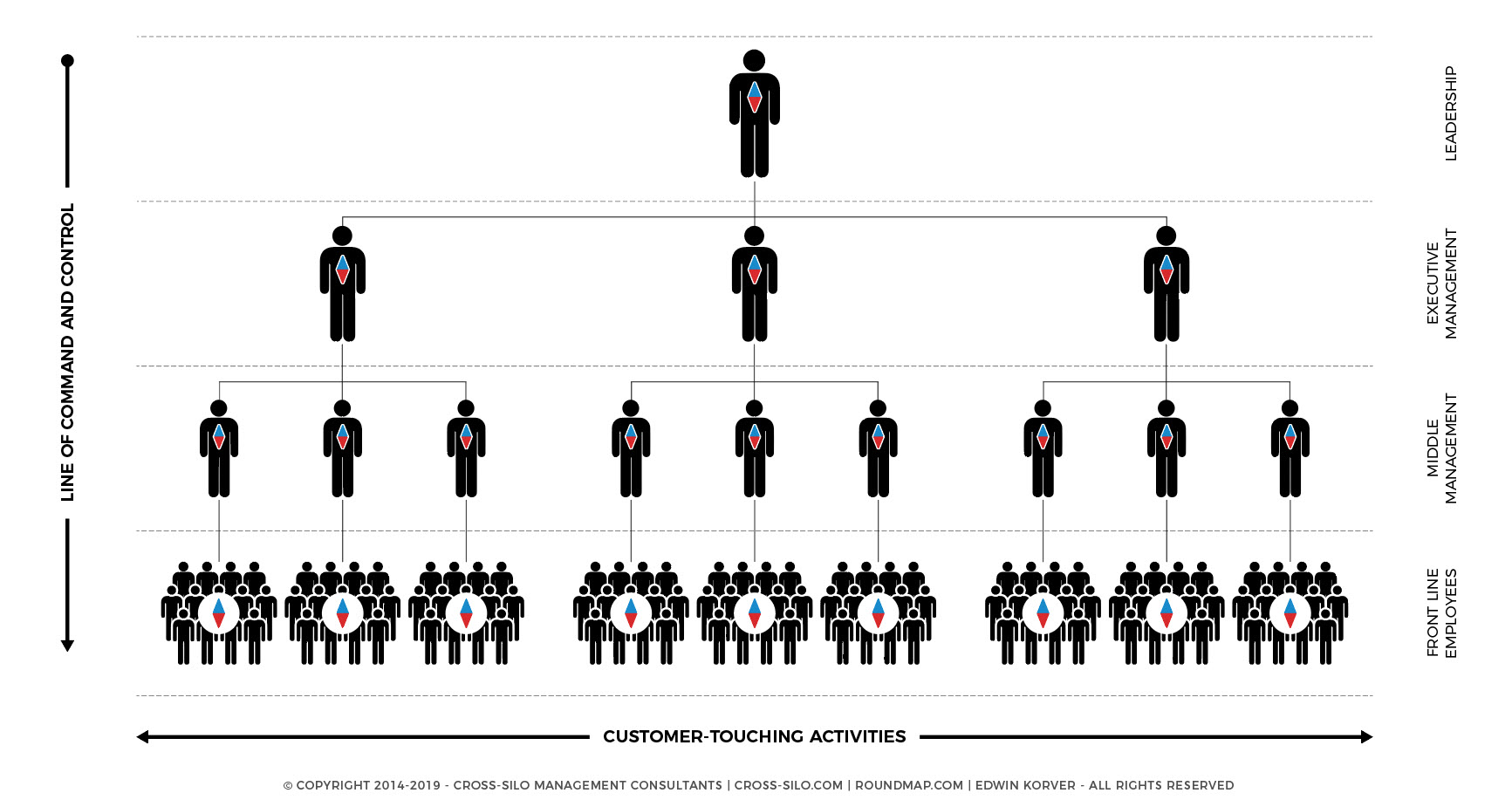 This structure excels in providing direction following a line of command, driving every individual within the business enterprise to perform their job as efficiently and effectively as possible. As John P. Kotter stated:

Urgency starts at the top of the hierarchy, and it is important that executives keep acknowledging and reinforcing it so that people will wake up every morning determined to find some action they can take in their day to move toward that opportunity.

While the division of labor and specialization drives – as predicted by Frederick Winslow Taylor in The Principles of Scientific Management – operational efficiency, it also created functional and mental silos acting as barriers between separate teams and departments, blocking the free flow of information: 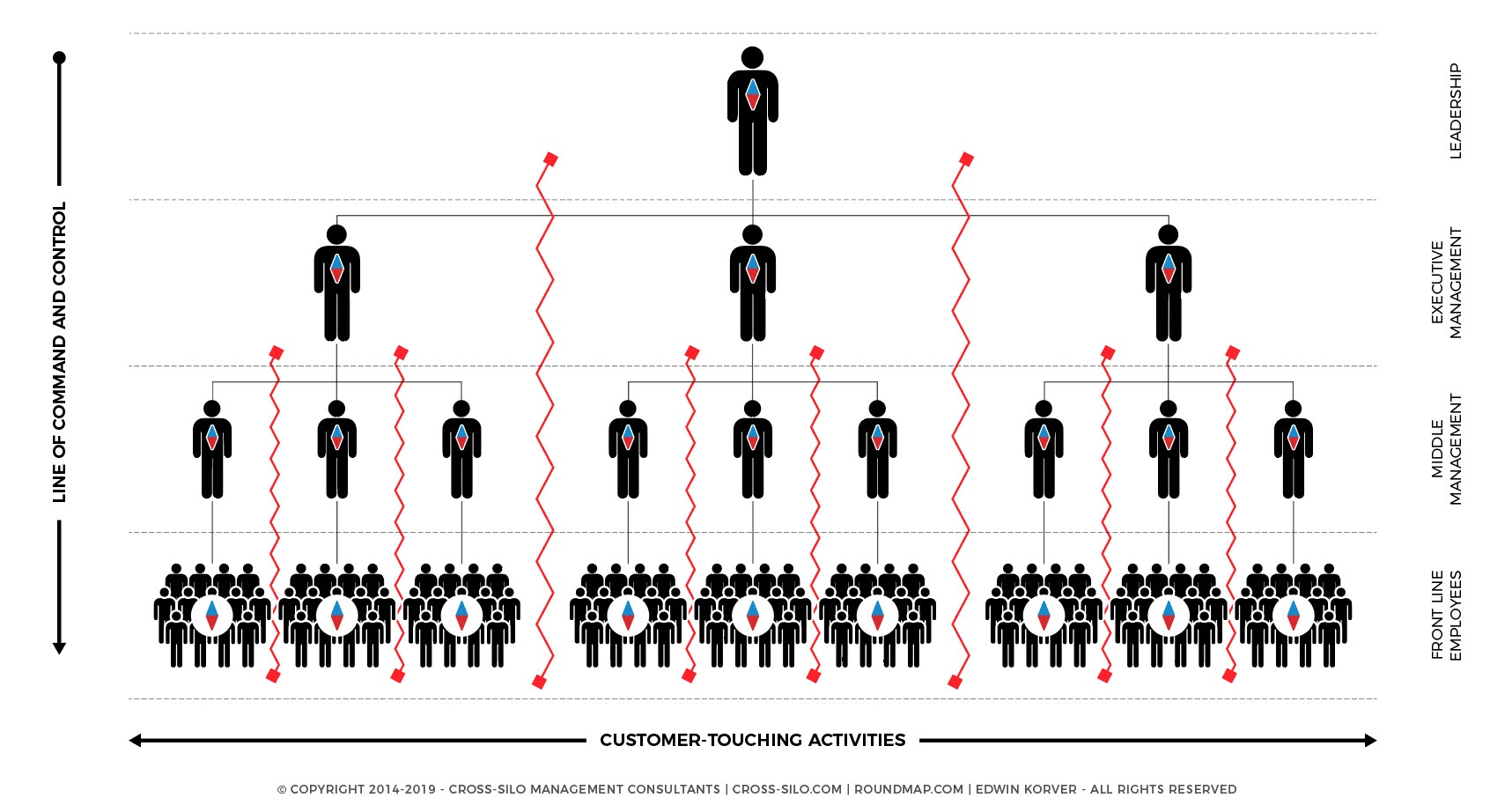 While customer expectations are increasing, competitors alter their mode of operation, new substitutes arise, regulation changes, technology advances, and so on: we’ll need to respond ever so quicky to changing market dynamics. So now imagine John (marked in red in the figure below), working in customer service, as he picks up on a threat. What are the odds that this information actually makes it (unfiltered and quick enough to matter) to the top? Or that the top is even aware of Mary (marked in green), who sits in marketing, and knows how to deal with it? 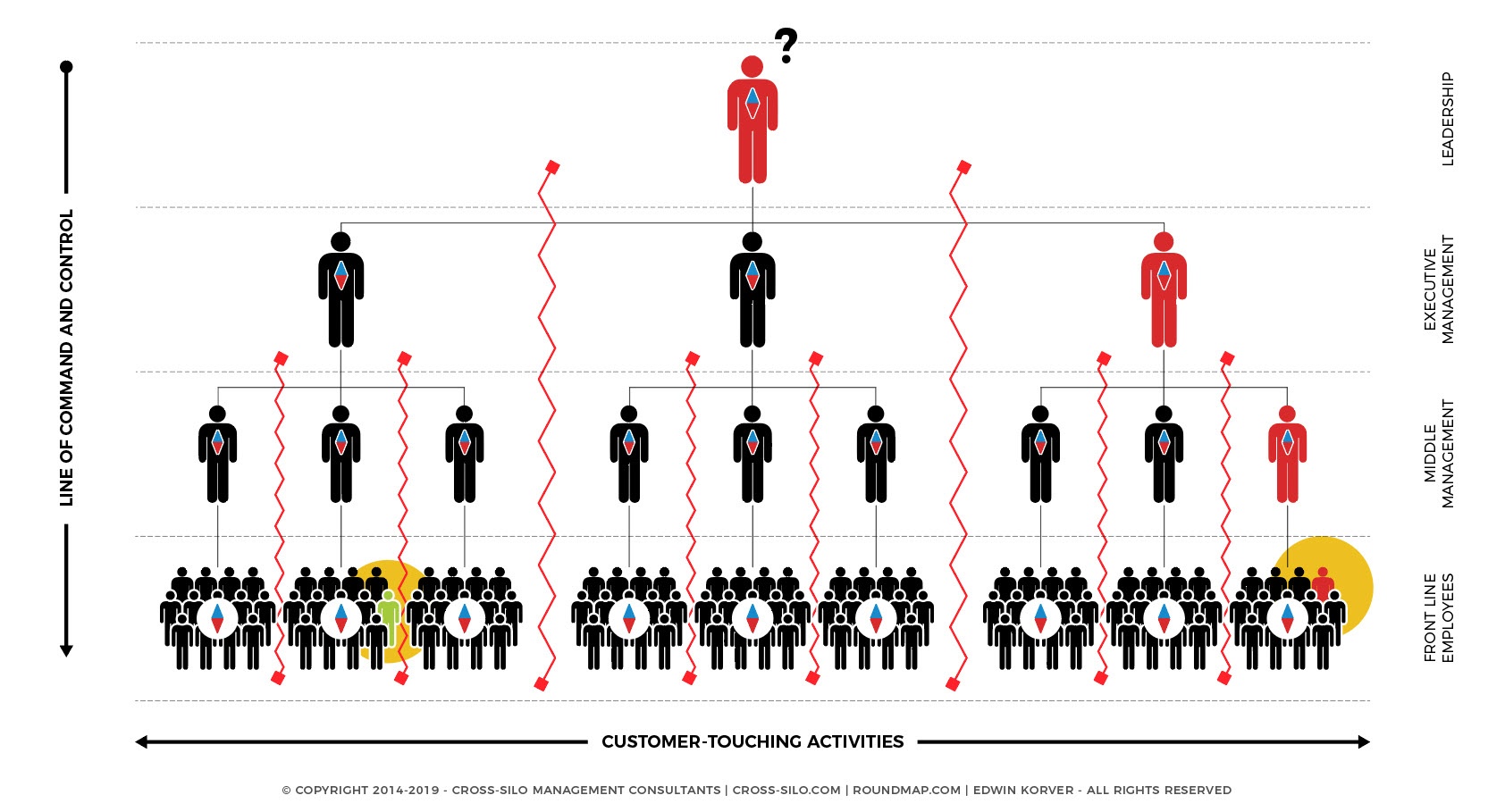 The command and control structure works as long a the market moves in predictable, long waves with minor disruptions. However, that’s not the world we live in today.

What we suggest is to introduce Customer Roundtables to encourage cross-silos collaboration between separate teams and departments at the Ultimate Level of Truth­™, the Integrated Customer Lifecycle, allowing John and Mary, as well as representatives from other teams and departments, to take a seat at the roundtable and discuss problems and solutions as they occur on the level that is most capable to respond to it: 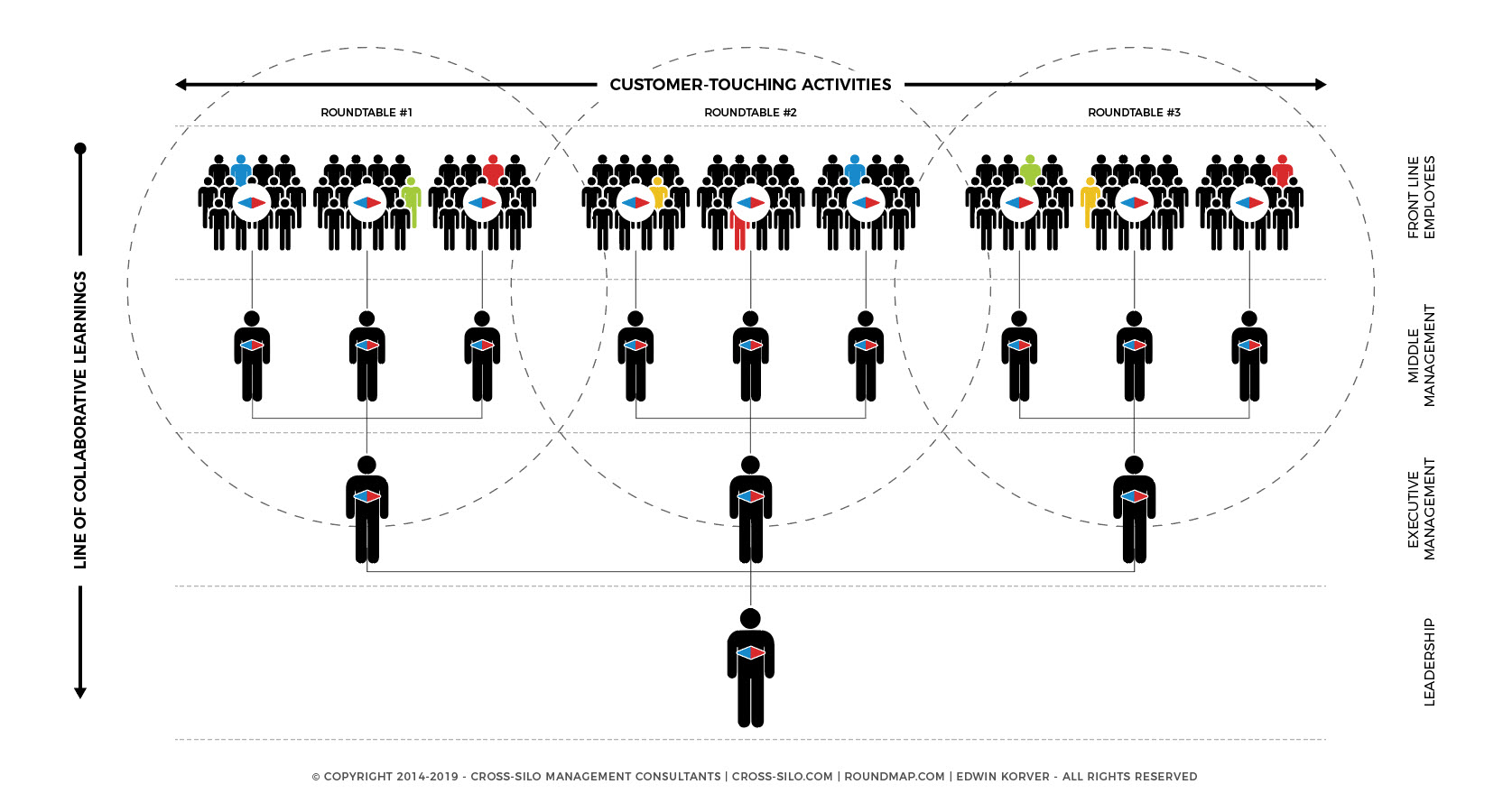 In fact, the Customer Roundtable will act as part of a secondary operating system, as suggested by John P. Kotter:

The existing structures and processes that together form an organization’s operating system need an additional element to address the challenges produced by mounting complexity and rapid change. The solution is a second operating system, devoted to the design and implementation of strategy, that uses an agile, networklike structure and a very different set of processes. The new operating system continually assesses the business, the industry, and the organization, and reacts with greater agility, speed, and creativity than the existing one. It complements rather than overburdens the traditional hierarchy, thus freeing the latter to do what it’s optimized to do. It actually makes enterprises easier to run and accelerates strategic change. This is not an “either or” idea. It’s “both and.” I’m proposing two systems that operate in concert.

We suggest to create one roundtable per productgroup, but allow members from each productgroup to circulate between roundtables to pass on relevant learnings. But remember: at a roundtable no one is ‘in control or command’. Each and every participant should be perceived as equal. These roundtables do not intend to raise productivity, instead increase agility, responsiveness and employee engagement. What we want to create is a early warning system and we need to attain it from collaborative learnings.

Again, we don’t intent to break down the silos, nor to disrupt the traditional hierarchy: we merely suggest to amend it, by introducing means of horizontal collaboration, allowing information to flow freely at a level in the organization that is detrimental to the future of the business – that of the Integrated Customer Lifecycle.

Although we will need more use cases to be sure, so far we’ve witnessed a couple of things happening:

However, we’ve also noticed that middle management resisted horizontal collaboration because of their fear of losing their position of power. As suggested by Jane Ripley, author of Collaboration Begins with You:

“In order for collaboration to take place, managers must give up their silos and their perceptions of power”. We’re not at all suggesting to break down the silos, they serve a purpose.

This has to be addressed as this fear is undeserved. Obviously, middle management will still need to define goals and objectives, execute strategy, remain cost-effective, measure outcomes, and so on.

What we believe will happen in time is that the positive effect of horizontal collaboration on the level of the customer lifecycle will encourage managers to collaborate. However, management will need to adapt to a secondary role which is more supportive, leaning towards servant leadership. The goal is to remove any vertical barrier between functions while cultivating the hierarchy of authority: strategy still needs to be defined, executed and measured.

We do need to be wary of horizontal silos. These horizontal silos could evolve if managers hold on to their positions of power – offering little support to the people they are meant to lead and serve – which could result in becoming excluded by your own people. Similar to how vertical silos hinder performance, horizontal silos block strategy execution.

Or as John Kotter described how two (operation) systems need to operate as one:

The network (the line of collaboration) and the hierarchy must be inseparable, with a constant flow of information and activity between them—an approach that works in part because the [collaborators] in the network all work within the hierarchy. [..] Governed by these principles, the strategy network can be incredibly flexible and adaptable; the accelerators can drive problem solving, collaboration, and creativity; and the people doing this work—the [collaborators]—will be focused, committed, and passionate.

We don’t suggest to adapt a matrix organization or even an inverted organization. We still believe in a traditional bureaucracy but with added responsiveness, allowing silos to exist, with managers supporting the people they serve, while providing autonomy to a level that is most decisive to the future of the company: the customer-touching employees that drive customer excellence. This article is a work in progress. We hope to learn more as we’re about to witness more use cases in the months ahead. 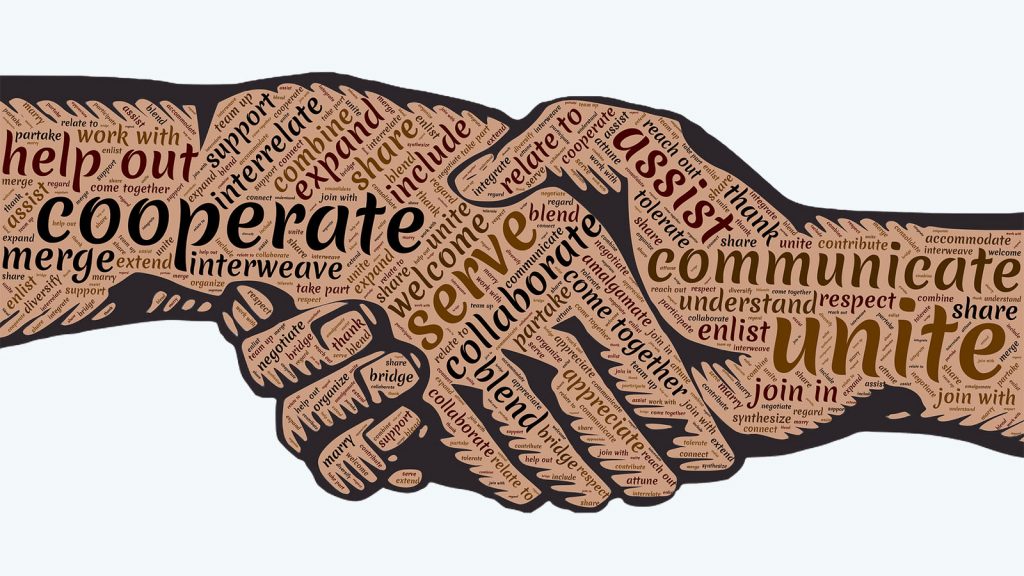