A few days ago I had the privilege to listen to the tales of two retired professionals as they looked back on their careers. Their stories, although worlds apart, made me realize that standardization ─ needed to deliver products and services efficiently and reliably ─ inhibits the ability of the business enterprise to improvise and demonstrate the agility needed to combat disruption successfully.

The first tale was of a retired technician who now works for a Dutch foundation, acting as a go-between by shipping used dialysis equipment to less fortunate parts of the world. The man explained how he had helped clinics and hospitals in Indonesia and Surinam. However, despite their best intentions, clear instructions, and strict procedures, each of the projects ended prematurely due to a variety of issues: lack of electrical power, lack of clean water, lack of local skills, lack of spare parts, etc.

The second retired professional was an architect. He had designed many non-residential buildings throughout his career – some of which were already demolished. He explained that scarcity had driven up land prices way beyond the value of the structures that were placed upon it. The construction industry in The Netherlands is extremely standardized, leaving little room for creativity. As a consequence architecture was mostly about the function and much less about design.

These two separate stories are indicative of the correlation between business maturity (level of standardization) and the relative market circumstances (favorable or not). The technician had experienced that high-quality equipment placed in an unfavorable environment made it impossible to guarantee a reliable patient treatment. The architect had learned that standardization rigor made his creative work almost impossible, leading to many look-a-like buildings.

This awareness led me to the creation of the Business Model Compass™: 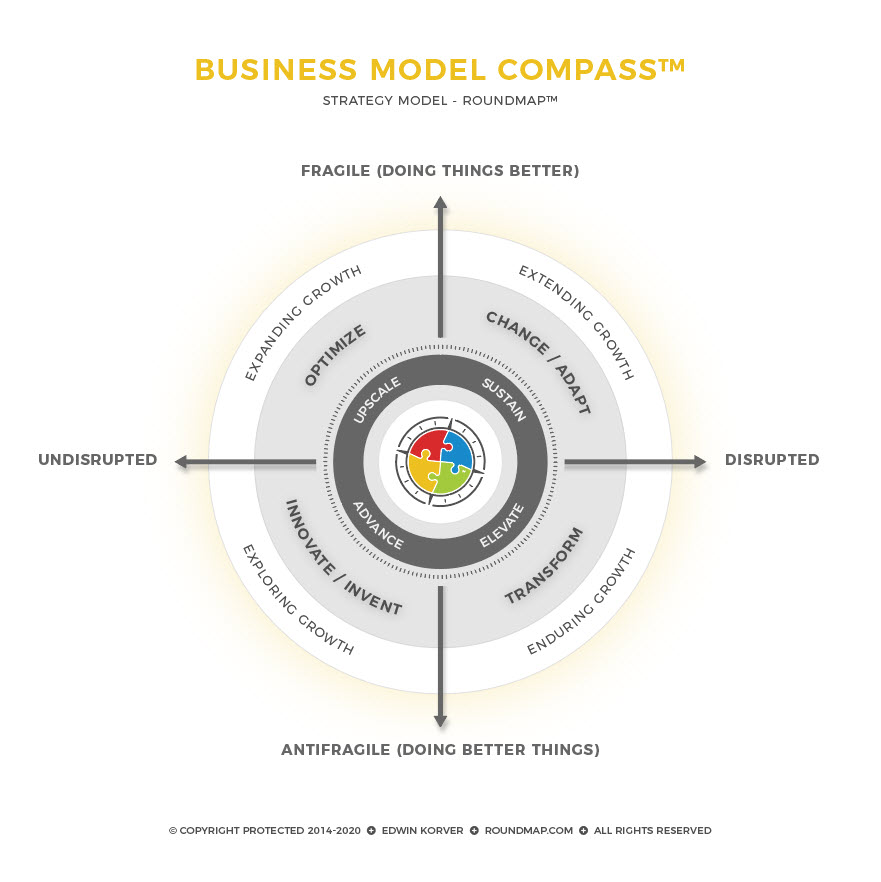 The Optimize-state is the most profitable and, therefore, the most desirable. However, it is a fragile state – a business can only remain in this stage for as long as the relative market circumstances remain ‘stable’, i.e., favorable/auspicious to what the business has to offer.

Clockwise: When the market turns ‘unfavorable’, leading to a decline in demand for its products and services, the business needs to adapt by entering a state of Change. However, if the unfavorable conditions persist, the business may need to rethink its entire mode of operation by raising corporate resilience and consider multiple scenarios for the future. As a result resource efficiency will start to decline but that’s a price the business must be willing to pay if it wants to survive and thrive again.

Working in an adaptive way is more costly and not defining the future in detail leaves us feeling uncomfortable but planning and working incrementally allows us to more easily and rapidly incorporate change when it happens, as it inevitably will.

Once the market favors the newly developed products or services, the imprudent operation needs to return to the Optimize-state.

Anticlockwise: Instead of adapting to disruption a business could choose to disrupt others. To do so, it has to become more agile (or antifragility as Nassim Nicholas Taleb would put it) which raises the responsiveness of the business, allowing it to experiment and improvise, unhampered by strict corporate procedures and processes.

The biggest impediment to a company’s future success is its past success.

Or as Heraclitus (540-480 BC) implied: Change is the only constant (Panta Rhei). Foretelling the future based on the past isn’t just a bad idea, business-as-usual has proven to be a pitfall for many entrepreneurs (Polaroid, Kodak, Blackberry, Blockbuster, Nokia, SONY Walkman).

Complementary to the Business Model Compass™ is the Cycle of Disruption™: 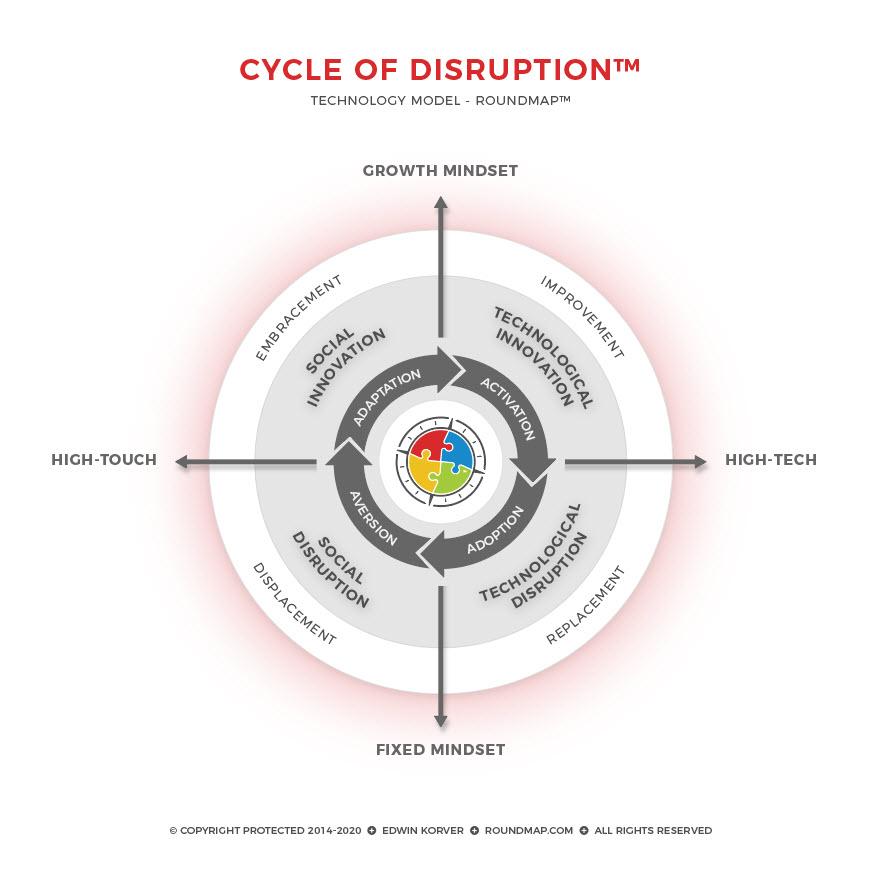 The Cycle of Disruption™ is a continuous motion – without a beginning or an end. However, since we need to explain its meaning, let’s start with the introduction of new technology (right side: Activation and Adoption). As stated by Joseph Schumpeter in his theory of creative destruction: economic growth can only arise from new technology displacing (disrupting/destroying) previous technology.

If old technology is prematurely discontinued (disrupted) by new technology, employment that had emerged from the previous technological wave becomes at risk. This upheaval causes social disruption, often leading to public uprise (anti-Uber and anti-Airbnb initiatives). This will slow down the adoption of new technology but in the end, the only way to cope with it is to re-educate people, demanding social innovation. And so the cycle continues.