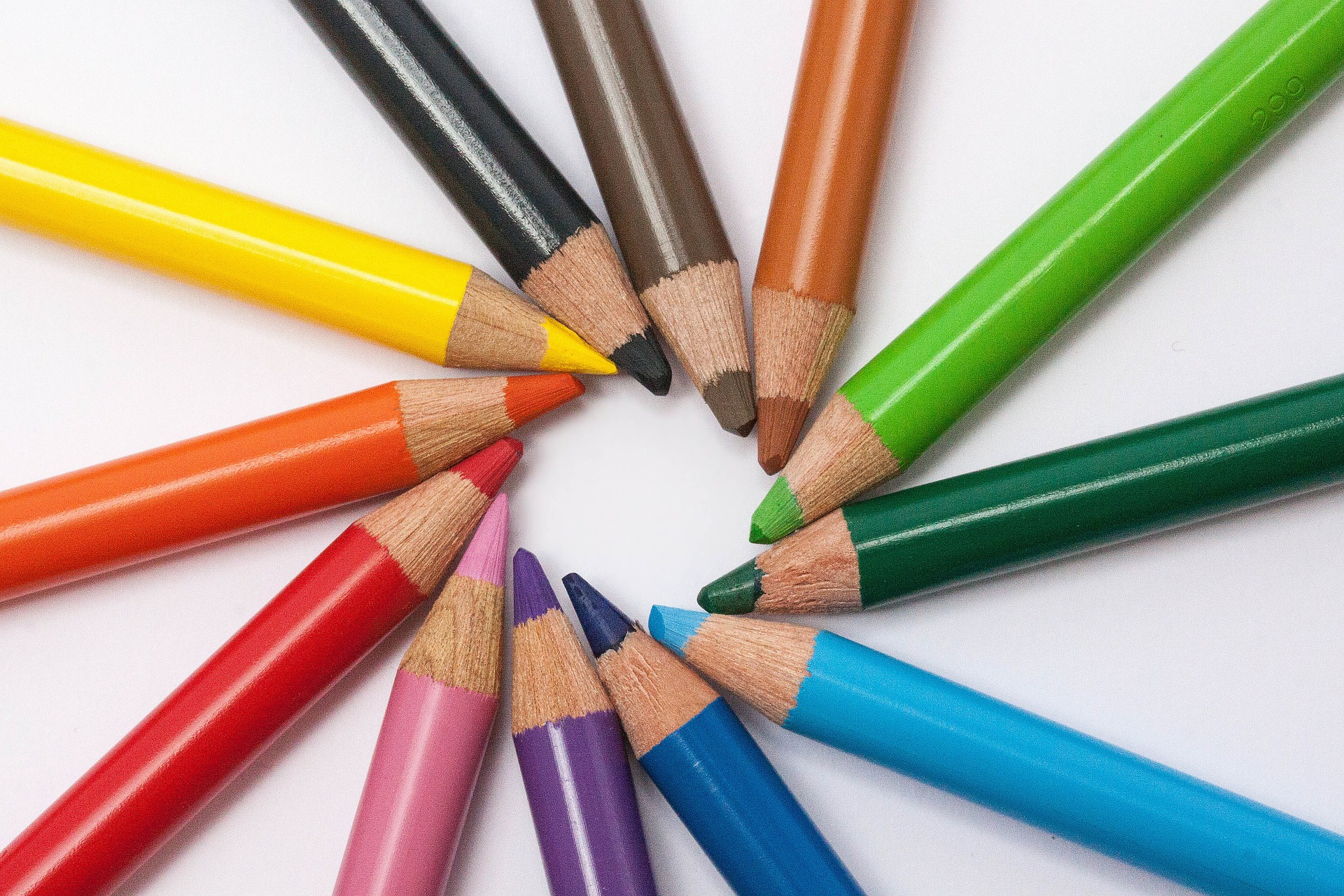 ROUNDMAP™ – How We’ve Closed The Loop

When we introduced our first symbol on May 11th, 2019, we had just finished mapping the realm of Customer Dynamics. However, as time went by, our scope widened, encapsulating the Organizational Dynamics, Business Dynamics, and Market Dynamics, next to the Customer Dynamics. As a consequence, the old symbol no longer represented the entirety of the framework.

Due to the rise of social media and digitalization, we decided in 2016 that the old way of thinking about customer interaction badly needed some serious reconsideration. So, at the start of our journey, we set out to create a contemporary map of the customer dynamics, expecting it would take us about six months to complete. After 5 years, we’re still working on it.

One of our discoveries was that there is no such thing as a ‘customer journey’; a journey suggests a trip or passage from one place to another. This isn’t a good analogy of what’s happening during a series of customer interactions, and we believe it’s even unwise to assume it is a journey.

Potential customers may find themselves in need of something that they want to fulfill. This perception of having a deficit draws them to those that appear to have a surplus; after all, opposites attract. To determine if the surplus meets a particular deficit, interactions take place to weigh in all the pros and cons, build trust, and determine if the price is worth the risk.

Underneath, you’ll find our understanding of this process of attraction, called The Value Hub Theory:

We found that attracting the right customers and serving them as promised isn’t a linear process from A to B. Instead, it moves in a circular motion, i.e., it is a customer lifecycle. However, one cycle is often not enough to expand the business. Customers need to return to the company regularly to make enough profit to continue innovating. While most companies have an acquisition strategy, very few have a customer retention strategy, making it so much harder to thrive.

So, we ended up creating what is now known as the Customer Lifecycle Map™, an intuitive 360-degree mapping system of all customer-related interactions. But we didn’t stop there. 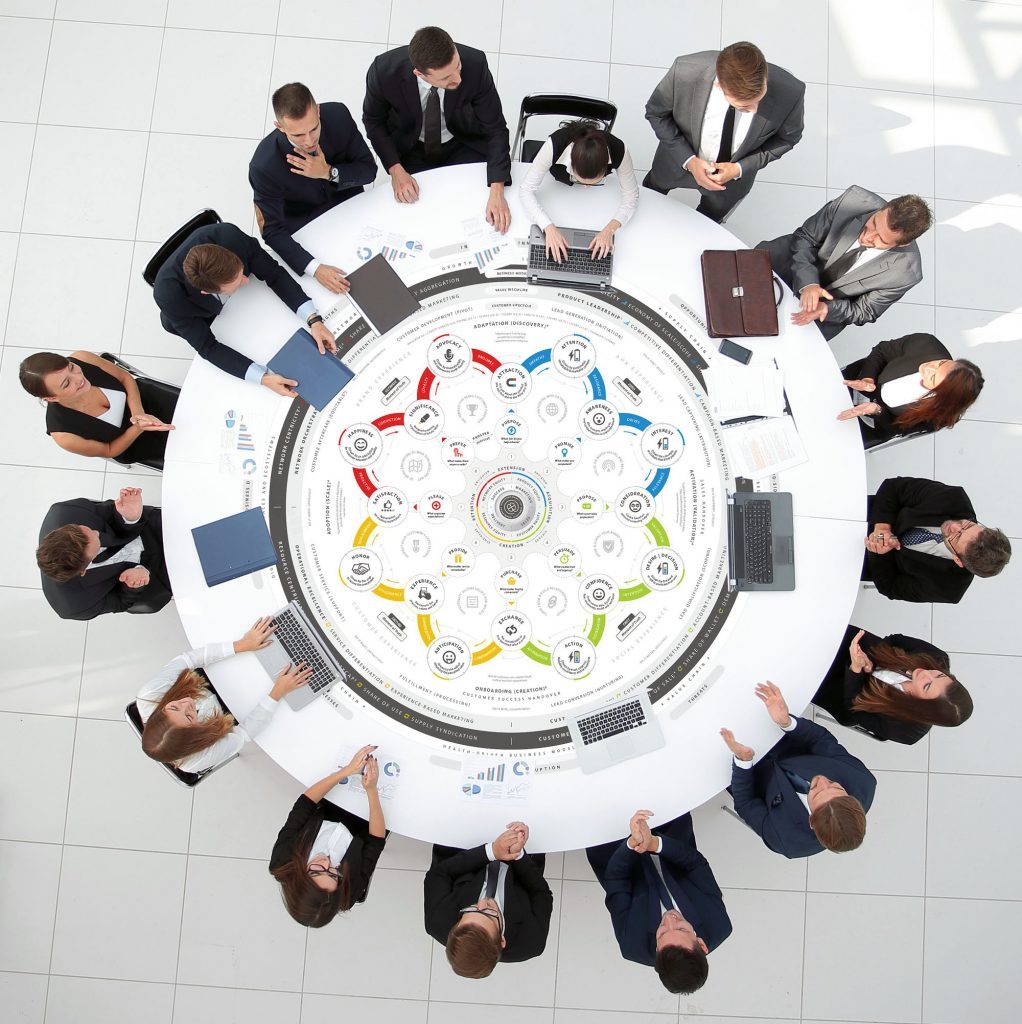 One of the most remarkable discoveries, following the creation of the Customer  Roundtable Blueprint™, was that we noticed that an emphasis on marketing seems to relate to Product Centricity. At the same time, a focus on Sales is required for Customer Centricity.

Given the four stages of the Blueprint, we asked ourselves the question: What type of Centricity matches the other two quarters, Delivery and Success? As it turned out, a focus on a particular quarter favors a distinct and fundamental business model. This understanding became the Business Model Matrix™: One of the issues we wanted to tackle was the dramatic effect of siloization on the frontline performance. Siloization is an unintended side-effect of bureaucracy (Max Weber, 1905).

Despite the positive outcome, what Ford had failed to resolve was the alienation of work. Workers had essentially bartered the meaning of work for the meaning of things and titles. Thereby giving rise to unrestrained consumerism that has been causing so much havoc to nature.

Richardo Semler, a young Brazilian industrialist, who was well aware of the side-effects of a bureaucracy, decided to create a self-empowered workplace within Semco, the company he had inherited from his father. His experiences and motivations can be found in his bestseller Maverick (1995).

Nonetheless, it took almost a century before the alienation of work took center stage. But it hasn’t prevented management from adopting the principles of bureaucracy to the entire organization. Even more so, we’ve entered the age of hyperspecialization (Harvard Business Review, 2010).

Today, 80% of (frontline) employees prefer to quit their jobs because of mental health issues (Forbes, 2020). Most employees have no clue what their contribution means to the firm (PWC,  Study of Purpose), while many companies, following green-washing, exert themselves through purpose-washing.

By the way, it wasn’t that Adam Smith (video below) was unaware of these side-effects. He argued that for growth to occur, the price of the division of labor, and specialization, in particular, had to be paid by the working class, the ‘greater part of those who live by labor’:s

"In the progress of the division of labor, the employment of the far greater part of those who live by labor, that is, of the great body of the people, comes to be confined to a few very simple operations; frequently to one or two. But the understandings of the greater part of men are necessarily formed by their ordinary employments. The man whose whole life is spent in performing a few simple operations, of which the effects, too, are perhaps always the same, or very nearly the same, has no occasion to exert his understanding, or to exercise his invention, in finding out expedients for removing difficulties which never occur. He naturally loses, therefore, the habit of such exertion, and generally becomes as stupid and ignorant as it is possible for a human creature to become. The torpor of his mind renders him not only incapable of relishing or bearing a part in any rational conversation, but of conceiving any generous, noble, or tender sentiment, and consequently of forming any just judgment concerning many even of the ordinary duties of private life."

The quote above is significant because it speaks to the phenomenon of alienation, whereby laborers find themselves ever more alienated from the products of their labor.

While Smith’s comments do not go as far as the Marxist critiques will in centuries to come, his observation that the division of labor, for all its efficiency, has negative effects on the human psyche is extremely insightful for the period in which he was writing.

Today, frontline employees experience a similar form of alienation from specialization and alienation of the customer. Please consider the schemes below:

To get a better understanding of Smith’s legacy, we’ve included a video overview of his ideas:

Following the creation of the Customer Roundtable Blueprint™, we began to realize that we needed to expand our scope and include aspects like the value chain, supply chain, product development, and growth. Because if we want to assess the performance of a frontline operation (the primary activities in Porter’s value chain theory), we’ll have to consider the gaps and constraints in the backside of an operation (the secondary activities of Porter’s value chain) too. Because aspects like product quality, speed of service, and consistency rely on its outcomes.

The notion started to arise whether it was possible to create a single framework with which to capture the entire business operation. And if we could, could we develop methods to design, develop, and direct it? This led to the creation of the Business Venture Roadmap™; basicly a step-by-step mapping system to design business ventures, to decide on the optimal orchestration of all of its vital components, and to determine on the key indicators; to be able to direct the firm toward its desired future. The notion that business was developing in cycles came from a conversation with our accountant. We had noticed that there seemed to be a repetitive pattern of events throughout history. Our accountant remembered something about a man named Kondratieff.

And indeed, Russian economist Kondratieff had confirmed (The Major Economic Cycles, 1925), as had the contemporary economist Joseph Schumpeter (History of Economic Analysis, 1954), that business cycles repeat themselves over a period of 55-60 years, following a predictable pattern.

The driver behind these business cycles is technological innovation, according to Schumpeter. While specialization drives innovation, as argued by Smith, the extension of value isn’t endless. And the principle of a free market, also defined by Smith, also has its limits.

After a while, the economy enters a phase in which breakthroughs and breakdowns occur simultaneously, disrupting the old cycle representatives while giving rise to the new. Innovation has a beginning (introduction) and an end (decline), similar to a life cycle in nature. To outlive the lifecycle of a product, the business needs to initiate new products. This is explained by the S-curve model, while the J-curve model teaches us that we need to invest before harvest. The adapted model of the Diffusion of Innovation shows us that we can prevent falling into the valley of death (J-curve) by prototyping to test the market prematurely (minimum viable product or MVP).

What these models have in common is that they are all cyclical, while lifecycles tend to be described in four stages (introduction, growth, maturity, decline). Please note, that we can describe many lifecycles, both in nature as well as in business, in four stages. To mention a few:

Then we took a closer look at the four factors that determine the outcome of a business: vision, strategy, purpose, and mission. In that particular order!

Next, we looked at both the Carousels and the four aspects that determine the business. Could we map all of them in one image? After careful consideration, it appeared we could, leading to the Business Lifecycle Map™. This became the pinnacle of the ROUNDMAP™ framework, while we consider the Customer Lifecycle Map™ to be its foundation. 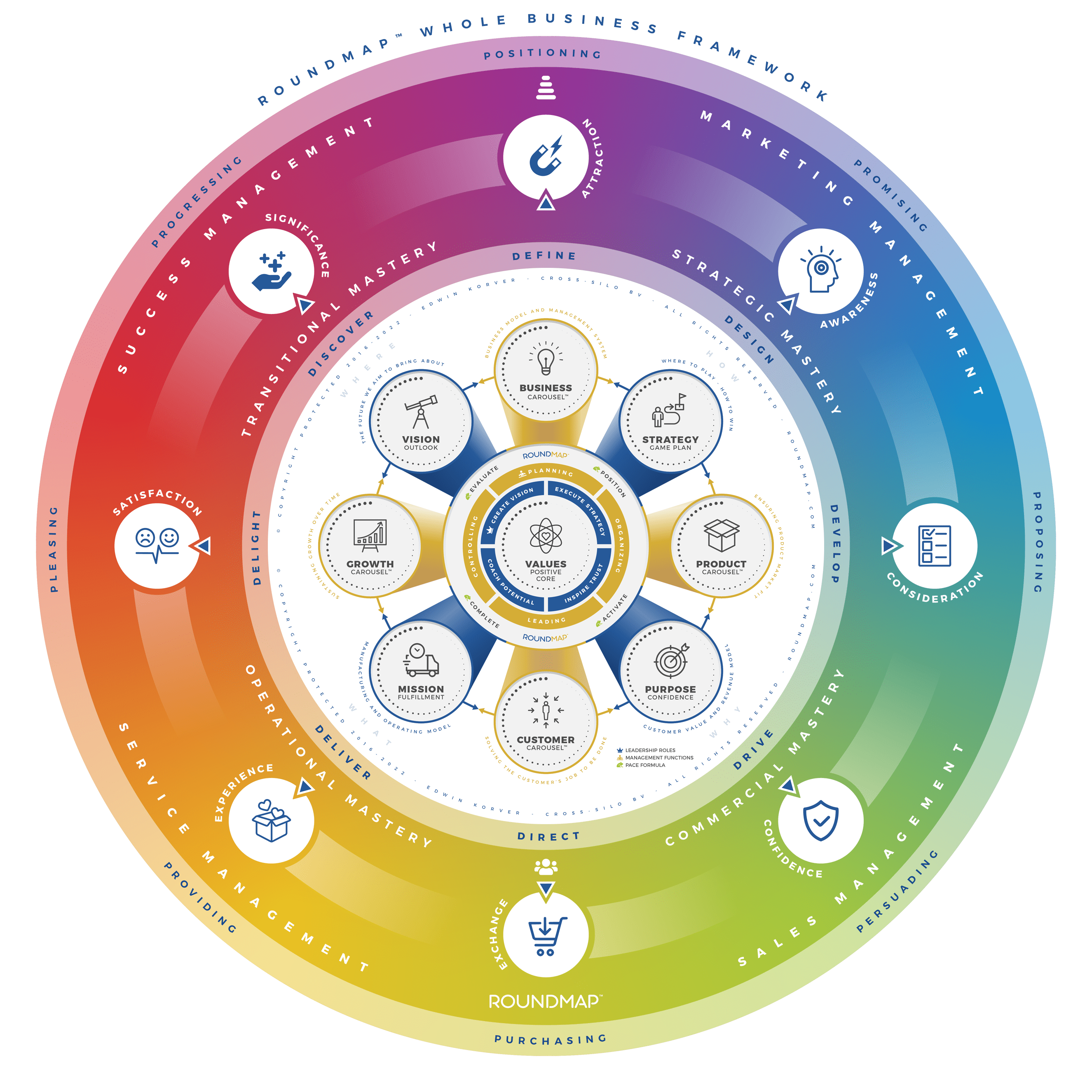 While we started by describing the situation as-is, we’re now moving in the direction of what-if: What if we can rally our staff behind a common purpose and get them to work together in unity to create significant value for our customers, to achieve sustained growth, most sustainably?

Today, the most important question leaders need to answer is how to create a regenerative future. A regenerative future is one in which humans and all elements of the natural world are in healthy, mutually supportive, balanced relationship with each other.

Leaders can’t answer this question by themselves. They will need to include their stakeholders. Not just to understand their interests but to involve them in the process of change or that of transformation. We call upon leaders to embrace the power of unity and diversity.

That’s it. We’ve closed the loop. ROUNDMAP™ is whole. 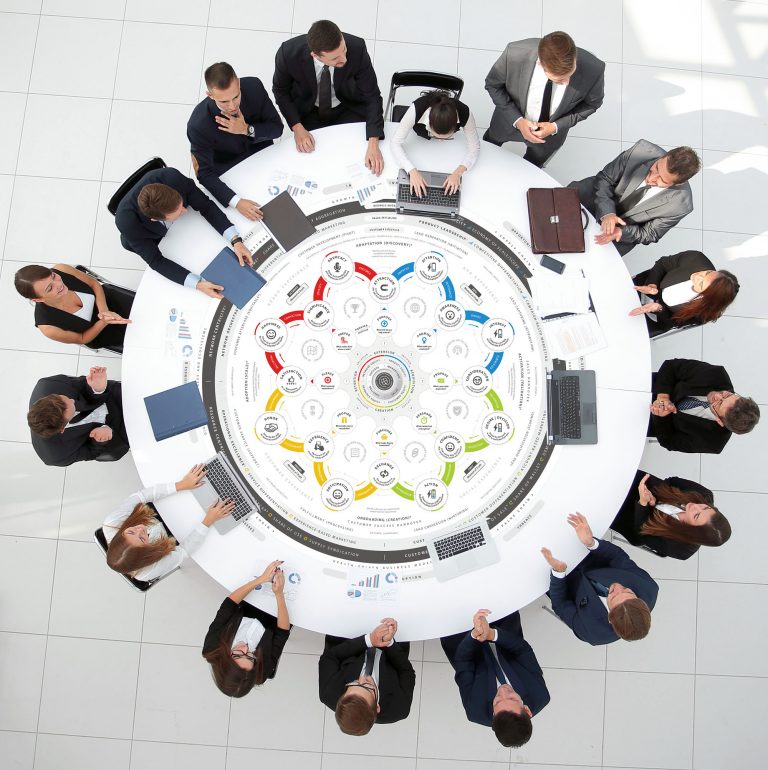