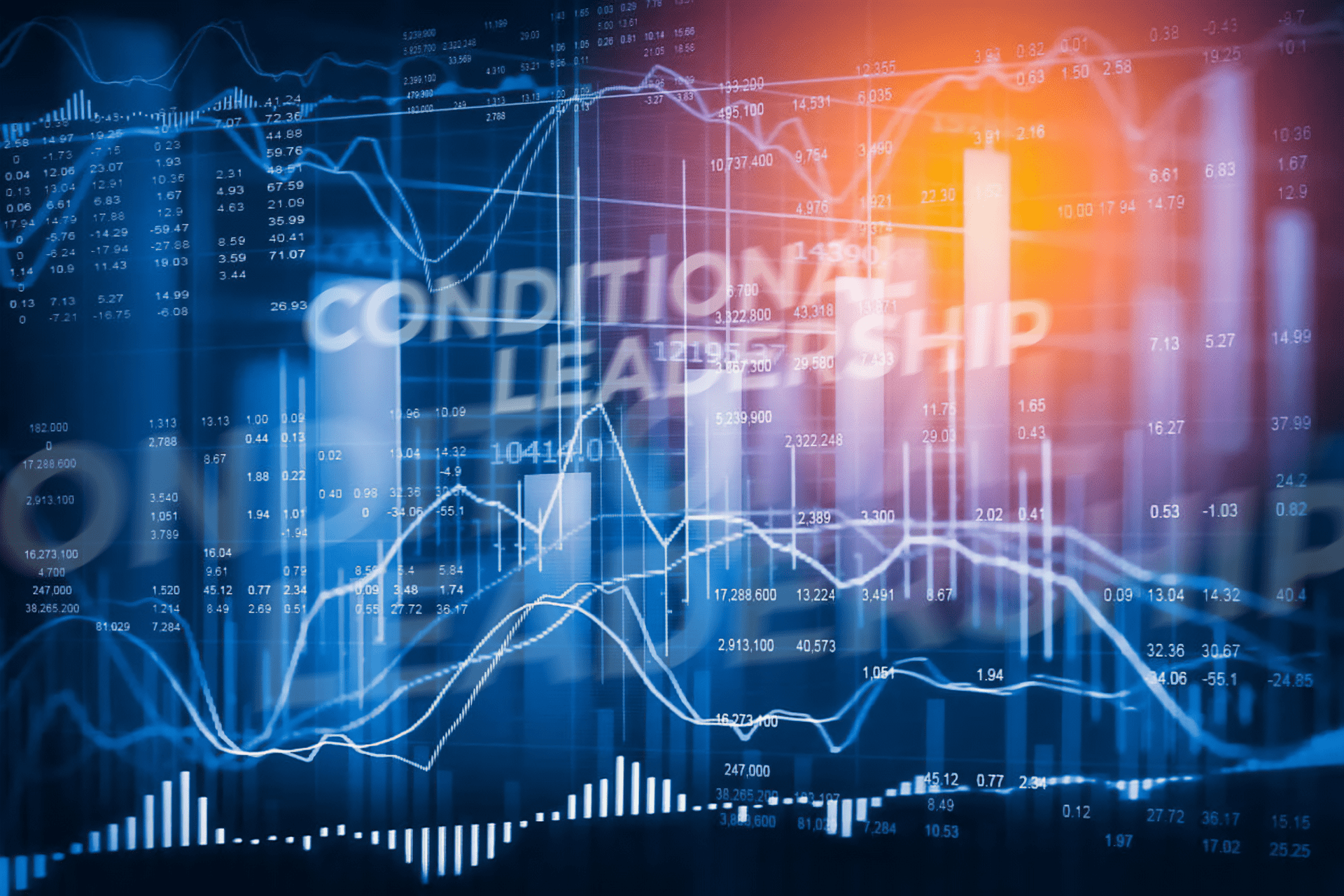 We believe that business leaders will be most effective when they learn to adapt the leadership style to the conditions, i.e., the internal and external conditions that (could) influence the business. We call this Conditional Leadership™.

Let’s take the recent pandemic. Suppose your style of leadership was democratic. It probably wasn’t very effective when your business had to face a sudden drop of 25-50% in revenue, forcing you to make quick decisions to keep a positive cash flow. After all, there wasn’t time for soliciting group opinions or debating the business out of harm’s way. Some of you will have made the switch to an autocratic leadership style, as the conditions demanded someone to take the lead and make tough decisions quickly and decisively. Those that didn’t probably still struggle immensely or have lost the battle. 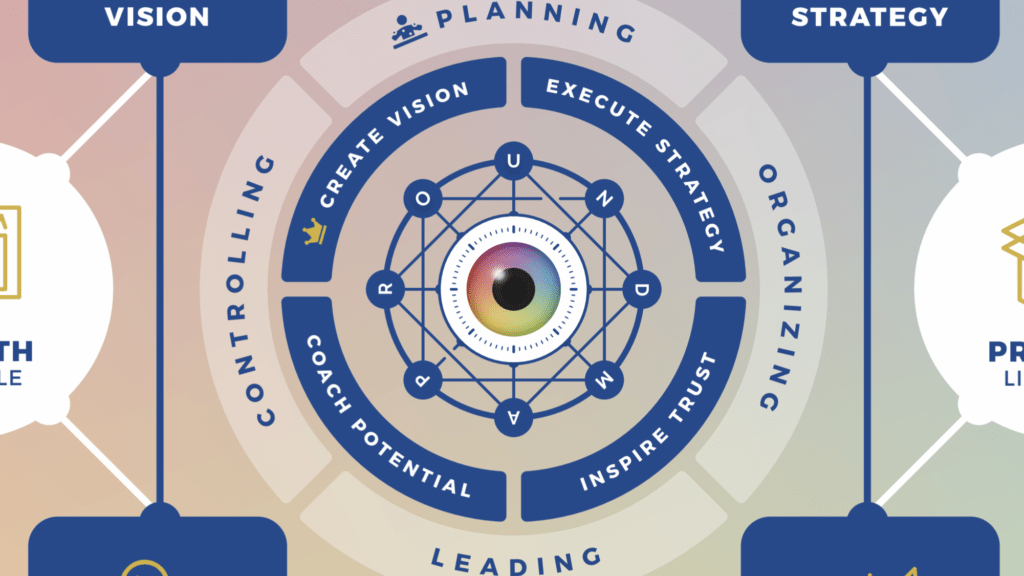 Leadership Styles in the Business Cycle

Next to unforeseen events like the recent pandemic, some forces bring somewhat more predictable conditions. Such a force is the business cycle and, in particular, the Kondratieff cycle or K-wave. It is a recurring economic cycle of about 53 years driven by technological advancements. Renowned economists like Nikolai Kondratieff, Joseph Schumpeter, and Carlota Perez (London School of Economics) support the K-wave theory, while scientists validated the hypothesis using a Bayesian statistical paradigm. 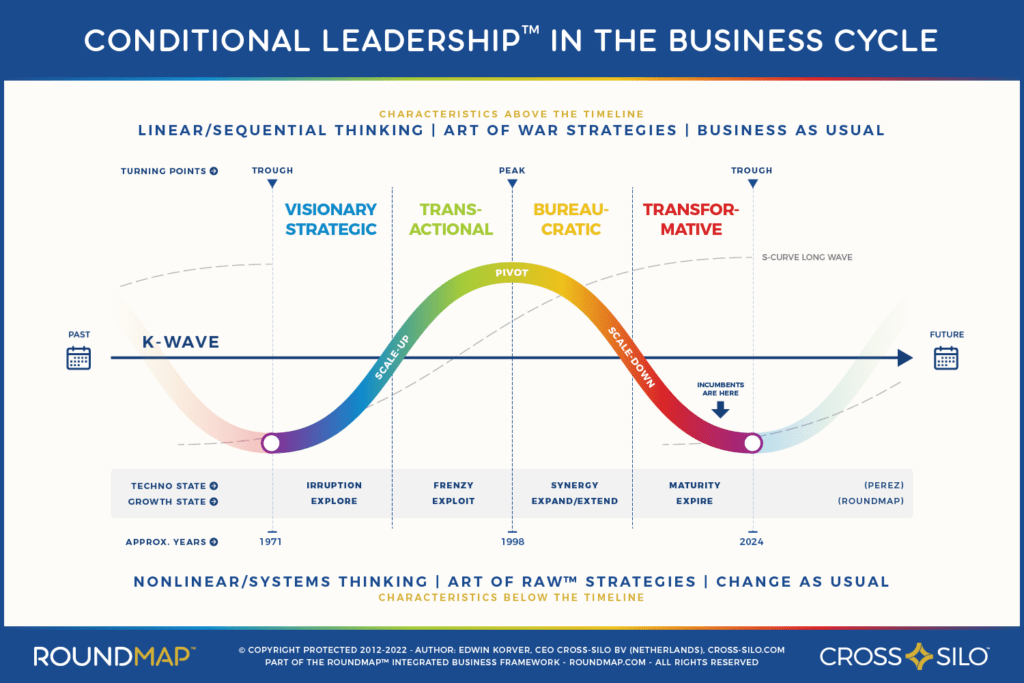 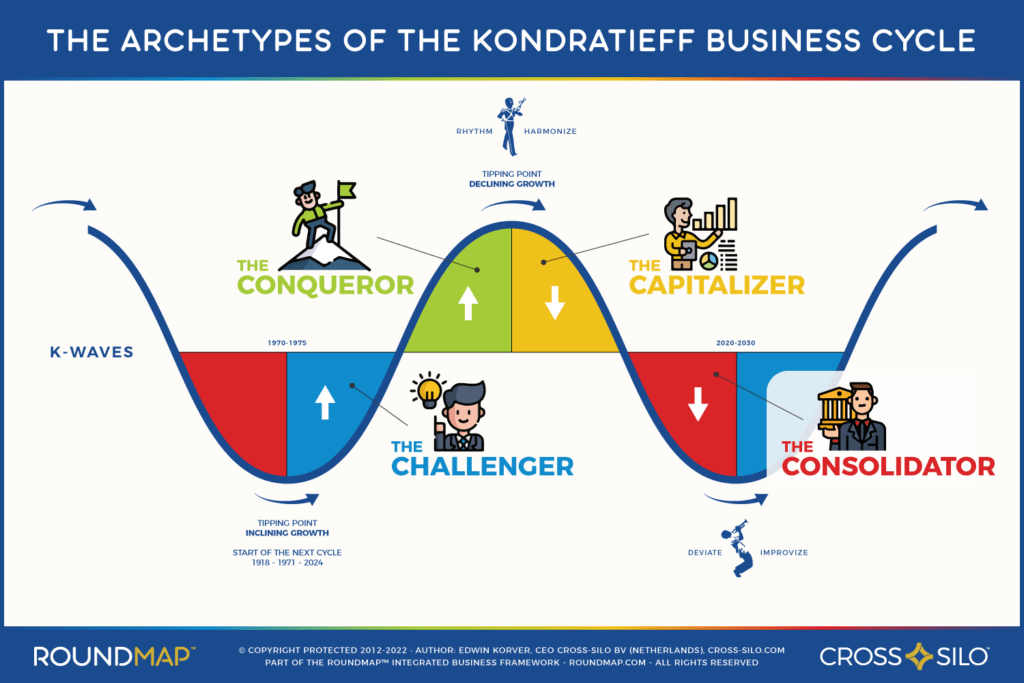 Today’s products and business models simultaneously decline because they all come from inventions in the sixties and seventies. It is, therefore, no surprise that many boards are looking for a CEO that can steer the company away from the path toward demise even though they are often unaware of the dynamics of business cycles.

Another way of dealing with a steep decline in revenue is to appoint an outsider to help turn around the business, as IBM encountered when the company reported the biggest corporate loss in history. Kodak, on the other hand, was convinced that their strong competitive advantages (making the highest-quality film) would protect their revenue streams (film and print), despite the rise of digital photography. But they failed to appreciate the change in external conditions: due to the exponential rise of mobile networks, the adoption of camera-equipped smartphones, and the popularity of social networks, customer behavior had shifted rapidly from printing photos offline to sharing pictures online. In a few years, Kodak lost 75% of its revenue, mostly in favor of Instagram.

Other market leaders like Blockbuster and Blackberry completely underestimated the industry’s capacity to increase the bandwidth and the speed of online connections, thereby creating the perfect conditions for Netflix and Apple to thrive. Nokia, Blackberry, and Microsoft had long ignored signals that users strongly preferred touchscreens on smartphones, allowing Google and Apple to take over the lead. If only leadership had known about these conditions, things would have developed very much in their favor. Alas.

A different Type of Leader for every Growth Stage

It is pretty common for startups, as they mature, to appoint a CEO that best suits the stage of its development: often beginning with an inventive type (Irruption), followed by a marketing or salesperson (Frenzy), next, an accountant (Synergy), and finally a M&A type or change agent (Maturity). Each period may have a different leadership style: highly inspirational, highly performance-driven, highly cost-effective, or keeping the lights on while preparing to make a leap (or foreclosing or selling the business).

In 1983, Neil C. Churchill and Virginia L. Lewis published an article on HBR of business growth, particulary for small businesses. The authors identified five stages of growth, from birth to maturity, with five general types of management styles (see image below). 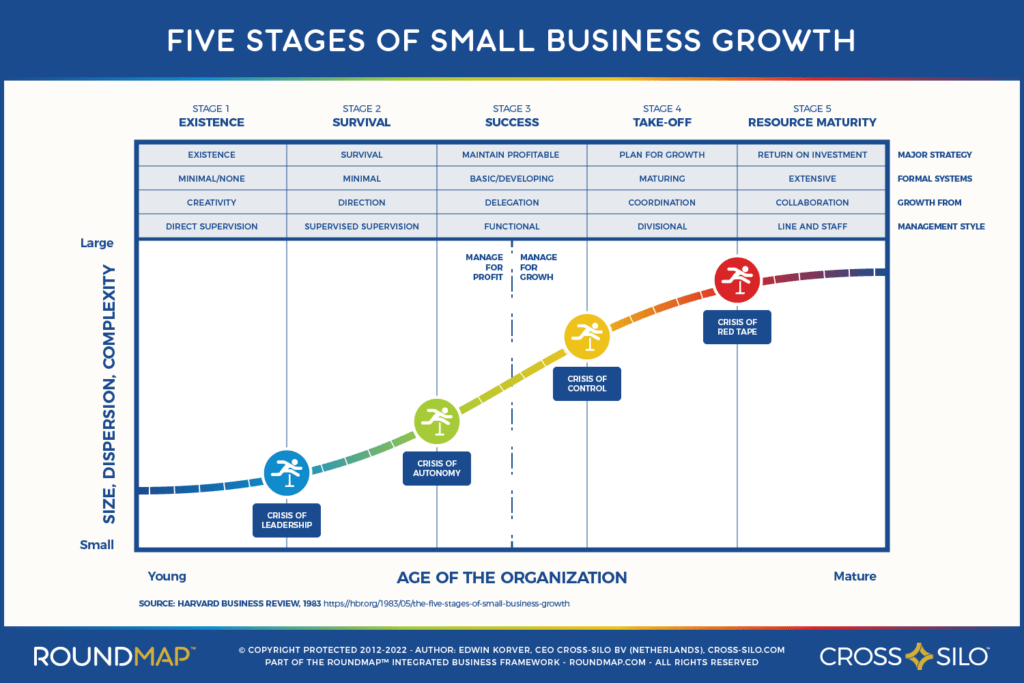 Contrary to what we discussed before, change management is about the response to the external conditions while creating the internal conditions for change. The practice of change management is a relatively young discipline, starting with a paper by Julien R. Phillips of McKinsey, first published in Human Resource Management (1983). Phillips’ work inspired several similar approaches, such as Kotter’s 8-step model and the Prosci ADKAR model.

Although this was 1983, and since we’ve almost progressed a complete cycle, leaders are now facing similar challenges. Phillips continued with,

“But today a great many companies are facing unstable competitive environments that are often changing profoundly. The dramatic reduction in economic growth ─ both domestic and international ─ has shifted the primary competitive battle from shares of new or expanding markets to survival shares of slow-growing markets.”

Again, history tends to repeat itself. Phillips concluded by stating:

“Thus, many companies are finding it necessary today to change drastically what they are trying to do and how they are doing it, in order to continue to be successful. Bringing about such organizational change by devising different kinds of strategies and patterns of operation creates a much greater managerial challenge than simply continuing to perform well within established strategies and operations, and it is a challenge for which few senior managers have much relevant experience.”

“It requires greater environmental sensitivity, imagination, and a different kind of leadership than continuing to operate well in as stable environment.”

There you have it. In 1983, McKinsey knew that change leadership hinged on understanding and interpreting the internal and external conditions (‘environmental sensitivity’).

Phillips believed this new style of leadership could be learned:

“The challenge of managing such fundamental organizational change can be met successfully, but first it must be understood.”

It is no coincidence that Peters and Waterman of McKinsey published their bestseller In Search of Excellence in the same year. The authors described how some companies outperformed others in innovation and creativity because leadership allowed small groups to launch new ideas despite the formal structure and the linear way of thinking.

Just to give you an idea of the various types of leadership, this is a shortlist.

Visionary leadership is the ideal management style to use when a business leader needs to introduce a new concept or new direction to current staff. With this technique, business leaders can inspire employees by presenting them with a powerful and progressive future outlook. To be successful with this method, leaders must make a strong connection with their team to earn their commitment. This can be achieved by creating unity and focusing on how important their team is to helping the organization achieve the new agenda or direction.

Coaching leadership involves honing a staff member’s individual talent so that they can develop their experience and expertise within their industry or field. With this approach, the leader’s goal is to identify the key skills of its employees and instill knowledge to help further develop the candidate’s career. To be successful with this approach, leaders will need to possess a strong understanding of each team member’s strengths and weaknesses, as well as their inspirations and motivations. This can be achieved by taking the time to get to know their staff and asking strategic questions surrounding their perceived strengths and what they feel they need to be successful.

Affiliative leadership is used to nurture workplace morale, helping staff members reconnect with their organization and their peers. This leadership style focuses on the group as a unit; however, it is important to hold each employee accountable for their role in the team re-building process. When morale is low, some workers need more motivation than others to encourage them to invest their hearts into rebuilding workplace relationships.

The autocratic leadership style is primarily the traditional boss-worker structure, where management makes a majority of decisions and workers do what is asked of them. An advantage of this method is that companies and organizations are able to execute their vision in an efficient and effective manner. A great example of when this leadership style is appropriate is for extremely complex projects – such as construction – where conformity is necessary for worker safety and project completion. However, if an autocratic leadership style is used inappropriately, workers may become extremely dissatisfied and can feel as though they provide little to no value.

Modeled after the military, the commanding leadership style is similar to the autocratic leadership style but involves no input from subordinates. The commanding method of leadership has long been known as the style used in a time of crises when there is no time for leadership to explain what is happening but immediate action is necessary. In the daily workplace, this is the most ineffective leadership style, as there are rarely daily crises and workers enjoy understanding what they are doing, as well as having a say in work-related projects and situations.

The laissez-faire leadership style involves leadership empowering staff with minimal directives. With this style, leaders often provide their staff with the tools needed to complete their work, and as appropriate, let staff resolve issues on their own. Although this method results in the highest job satisfaction rating, the success of the style can be largely dependent on the composition of the team and specific to highly skilled and motivated staff members.

The bureaucratic leadership style relies on the positions individuals hold within their organizations and businesses to definitively outline their responsibilities, rules and regulations within the organization. An advantage of this leadership style is that it is highly efficient and controllable. This is due to the fact that bureaucratic leadership can be thought of as a system with several levels of management, each reporting to the level above it. The cons of this style are that it is quite hierarchical, and workers or managers on the lower level have a difficult time expressing good ideas or input to those in charge, as they often have to travel through a vast chain of management.

Depending on the circumstances a business leader is dealing with, they may need to incorporate different leadership styles to move their organization forward, especially as organizations face growing complexity and ongoing change. Whatever styles business leaders use, it is important to remember to apply the right style to the right situation to help enhance employee performance and morale.

PrevPrevious ItemWhat is the Probability of a Perfect Company-Product-Customer Fit?

What is the Probability of a Perfect Company-Product-Customer Fit?